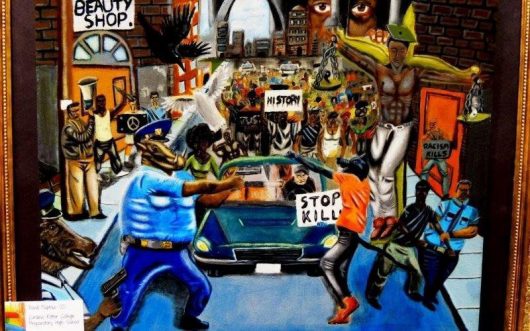 UPDATE 1/11/2017: NCAC has released an additional statement addressing the news that the removal of the painting was justified by a Congressional Art Competition rule that excludes entries that "[depict] subjects of contemporary political controversy or a sensationalistic or gruesome nature:"

"It is our understanding that the work went through the full selection process and was reviewed by the panel chaired by the Architect of the Capitol. Representative Hunter one-sidedly deciding that the painting was violating the guidelines only demonstrates the need to clarify those guidelines. The work depicts, in an allegorical manner, a fact of our recent past: protests against police violence. Telling young people they should not depict the world around them for fear of offending our political representatives is worthy of a totalitarian regime, not the halls of the US Capitol."

In addition, Rep Dana Rohrabacher, who took the painting down the second time, was one of the initiators on the culture war on the arts in the 1990s: during his very first term in office he called for the total abolition of the National Endowment for the Arts and thus for an end to federal funding for art.

National Coalition Against Censorship (NCAC) has released a statement in support of Representative Lacy Clay's decision to put a controversial painting back on display in the U.S Capitol building after it was removed, without permission, by another congressman on the grounds of offense.

Read the original statement below; click here for a full screen view.