Nudity in Art is Not Indecent Exposure

Previous Next
Nudity in Art is Not Indecent Exposure

The arrest of Zach Hyman’s nude model during a photo shoot at the Metropolitan Museum of Art was predictable in spite of the irony of the location. Whereas marble and oil nudes are usually left at peace (not always though: art containing nudity is a frequent target of censorship), a living woman posing naked for an artist is guilty of exposure. Some of the absurdity of that situation, however, is 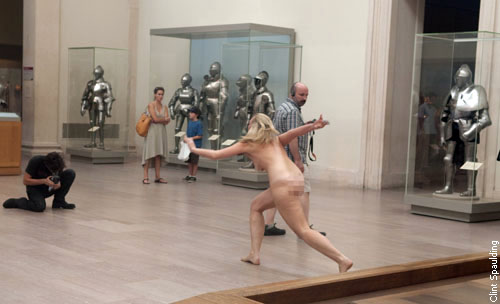 tempered by the fact that New York’s ban on public nudity provides an exemption for “any person entertaining or performing in a play, exhibition, show, or entertainment.” In other words, nudity for artistic purposes is not illegal: a detail apparently unknown to those who arrested Hyman’s model.

In a case argued ten years ago, involving the artist Spencer Tunick who photographs groups of nude people in public places, the U.S. Court of Appeals (Second circuit) found that the exemption for a “play, show, exhibition, or entertainment” should, indeed, apply to a photo shoot, otherwise the law may run into constitutional problems. As the court noted, “It is enough to ask why a nude performance with an audience would be permitted, and a photo shoot in the same place would be prohibited, to suggest that significant constitutional problems, based on irrationality, attend the City’s reading of the statute.” (TUNICK v. SAFIR, 228 F.3d 135 (2nd Cir. 2000))

We hope the case against Hyman’s model is dropped. We value art as it challenges the drabness of the everyday, Met Museum photo shootthe routine of the expected – the juxtaposition of a live nude with the artwork of the Met, opens this kind of provocative middle conceptual ground between the museum visitors’ present and the art on display. Is the model just another visitor disregarding the social norm that forces us to cover our bodies or is she like the artwork – exposing her body for the delight of the camera and the spectator? It is precisely questions like this that Hyman’s work raises – let’s hope we remain free to discuss these questions without police interference.

Now Hyman will stir some more serious controversy – and offer some real challenges is he starts working not with beautiful female models in fetching poses but with nude men and less then perfect women. Will he dare?