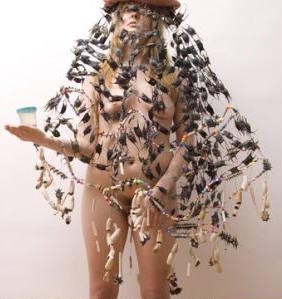 from Brian Reed's "Through the Heart of it All" exhibit

Representations of nudes in painting, sculpture, and photography frequently become subject to controversy. The law, however, is clear: simple nudity (that is nudity outside of a sexually explicit situation) has full constitutional protection. (That does not mean that public officials are always aware of this as a current case in Temecula, CA, testifies.)

But what about a live naked person used as an element of an art installation? The NYPD is not sure. Law enforcement went into the Chair and Maiden Gallery in New York last Sunday and asked for the removal from the gallery’s streetfront window of a naked woman enveloped in a mesh made of shark eggs and teeth, beads and clay pipes. Apparently some neighbor complained about the piece. However, when the woman took up her position in the storefront again yesterday, police circled around but did not interfere.

Indeed, the state statute addressing public nudity provides an exception for “any person entertaining or performing in a play, exhibition, show or entertainment.” The statute was referred to in a case involving Spencer Tunick’s photo shoots of public nude installations. In June 2000, the United States Supreme Court ruled that the city could not stop him from staging a mass nude photo shoot below the Williamsburg Bridge. More recently, the city dropped public lewdness charges against a model, Kathleen Neill who ran naked through a gallery in the Met for the purpose of a photo shoot.

The law aside, what’s in a body? We all have them, we feed them, wash them, exercise them, and most of the time use them for purposes unrelated to sex, but, yes, bodies can also give and receive pleasure. But why all the shame and the concern that children may be around? When someone wants to censor a nude I always wonder about their own dirty thoughts and the shame and guilt that lurks in their own minds.