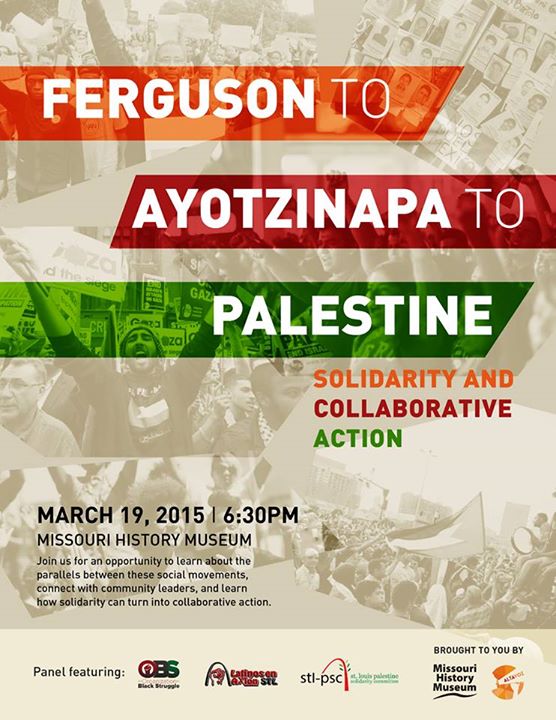 Tonight, the Missouri History Museum was supposed to be hosting an event called "Ferguson to Ayotzinapa to Palestine: Solidarity and Collaborative Action." The discussion was organized by the Washington University student group AltaVoz, in collaboration with several other community activist groups.

But just two days before the event, the museum decided to cancel it.

The museum says that the program was significantly altered from the original idea–the difference being the inclusion of Palestinian solidarity activism. The original proposal to the museum from student Sourik Beltran, dated February 1, was for an event called "From Ayotzinapa to Ferguson: A Dialogue on Solidarity and Inter-Movement Collaboration."

According to a statement from the event organizers, the museum was apprised of the change in the program soon after, and had been publicizing the event in its final form, which included the Palestinian perspective:

A month-long series of e-mail exchanges and face-to-face meetings between organizers and Missouri History Museum officials, including the confirmation of a poster and event title that explicitly noted the inclusion of Palestine, successfully lead to the event’s approval, intended to take place today in the museum’s Grand Hall.

So what happened? A statement from the museum does not offer any more specificity:

We were initially open to the changes and posted information about the program on our website. However, after much consideration we decided the complexities of this issue could not be adequately addressed in this format.

All of the issues under discussion are enormously complex. But based on email correspondence between the museum and Beltran, it was the link to Palestine that raised alarms. Officials expressed concerns about comparing Ferguson and "the actions of the Palestinians," which "some people" see "as comparing appl(es)/oranges."

Of course, a museum has the curatorial discretion to present programming as they see fit. But the argument here is hard to parse. Is the museum saying that they have trouble seeing how Ferguson is linked to Palestine, but are comfortable with connecting protests over what happened in Ferguson to the killings of student teachers in rural Mexico? For what it's worth, Ferguson activists have long been in contact with Palestinian protesters, and some even made a trip to the West Bank in January.

Museum president Dr. Frances Levine told a local newspaper that she was not even aware of the event until seeing a flier earlier this week. But to her, the issue was oversight:

My staff usually has to justify how events relate to our programs and our mission, and I don't think the staff had really grappled with it… I recognized the complexity of the issue. Our staff couldn't describe to me adequately how this would function.

The paper also reported that she "had doubts a student-run panel could meet the museum's high standards for moderated panel discussions."

But this explanation also raises questions. The museum was apparently comfortable with hosting the same discussion, excluding Palestine. So are they really saying that a student-led program that attempted to link protests in Mexico and Ferguson would be acceptable, but one that included Palestinian activism would somehow fall short? It is an argument that makes little sense on its face, and appears particularly suspect in light of the history of complaints about events featuring Palestinian perspectives on the Mideast conflict.

Just in the last year, we have witnessed attempts to shut down any number of such events: the Metropolitan Opera production of "The Death of Klinghoffer," which some claim is sympathetic to the plight of Palestinians, the temporary closure of Conflict Kitchen, a Pittsburg art project which serves food "from countries with which the United States is in conflict" (the Kitchen had served food from Afghanistan, Iran, Cuba, North Korea and Venezuela, but when it came to the Palestine, massive protests were followed by death threats), and the firing of the artistic director of Washington, D.C.'s Theater J over his production of plays including Palestinian perspectives.

Instead of an event exploring the complexities of politics, collaborative action and solidarity, tonight there will be a protest against the museum's decision. An opportunity to deepen our understanding of political processes has been lost.