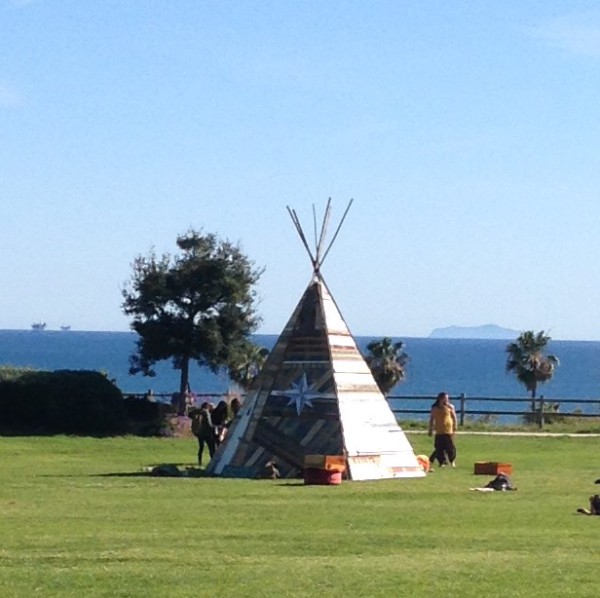 A class of art students at Santa Barbara City College (SBCC) built a wooden teepee, but complaints from indigenous students led to its prompt removal.

The students who had constructed the teepee explained that they chose to do it for several reasons, including their interest in the architectural form of the construction. The students wanted to create a space for connectivity, engagement, and reflection.

When SBCC posted a picture of the students and the teepee on their Facebook page to promote the project, a furious debate ensued. Some indigenous students were offended by the way in which the tepee, an artifact associated with Native American culture, was used as material in an art project. Others were angered by the lack of reflection, in the piece, of the brutal reality of Native American history.

Art Department Chair Joy Kunz said the intent of the artwork was not to insult anyone: "The art students did not intend to create a structure that would mock Native American cultures. The piece was a time-based performance assignment, and the students intended for the space to be used by people to come together."

Gaskin sent an email to the entire campus, and apologized to the Native American community, noting that "such intent never entered the minds of these art students or their professors." Gaskin also emphasized that higher education institutions provide a space for intellectual curiosity, exploration, and growth.

Of course, no matter what the intentions of artists are, art is open to multiple interpretations and some audiences could perceive in it elements of which the artists were never even aware. And that is why the discussion artwork triggers could be a productive exploration of contexts, perceptions, and histories. The removal of a controversial work, however, effectively ends the discussion before it has had a chance to develop. Art ought to provoke, and the response to a controversy – especially on a college campus – should be to expand the discussion, not to kill the artwork.

A discussion forum has been set up to discuss issues on cultural sensitivity on April 7 and will take place in SBCC’s Garvin Theatre.