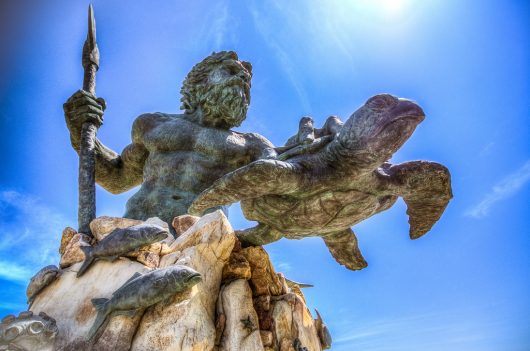 DiPasquale's Neptune, prior to makeover

UPDATE 7/25/2016: NCAC has released a statement expressing dissapointment at Virginia MOCA for refusing to compromise and cancelling Olek's art installation. NCAC's statement, posted in full below, highlights the importance of artwork–in our era of climate change– that inspires crucial dialogue about environmental issues. It requests that, going forward, the museum "hold firm to its mission to stimulate 'critical thinking and dialogue throughout the Hampton Roads community'."

The Virginia Museum of Contemporary Art (MOCA) has stirred controversy in recent weeks following its decision to allow a Polish artist to "makeover" a large bronze statue of Roman God King Neptune. The artist in question, Olek, was contracted by the museum to proceed with a design crocheted entirely out of environmentally-friendly materials. However, Olek made a last minute decision to add a gas mask to Neptune's face- an overt motif intended to provoke thought about the man-made harm done to the environment–prompting pushback from the museum. In a statement, reported by the Virginia news station WAVY, the museum described how the mask broke the terms of the original agreement and how they offered Olek "creative alternatives." When Olek proceeded to implement the mask, the museum immediately moved to remove it from the statue.

“When I put the mask on, it became like huge drama, calling police and telling me to stop and taking it down, unfortunately,” Olek told WAVY, describing the ensuing controversy. NCAC spoke to one of the volunteers who helped Olek implement her design, Traycie West, who spoke of her anger and frustration over the mask's removal. West also emphasized the clarity of the message the mask communicated:

I do wish to repeat a conversation I had with a retired couple, both of which held college degrees in Fine Arts, who stopped by during de-installation. The woman said she had seen the piece the day before and did not understand the message.  In the morning, when the gas mask was in place, she said the message was immediately clear to both her and her husband.  In their professional opinions, the piece was not as powerful and did not convey the message without the mask.

NCAC also spoke to the orginal creator of the sculpture, Paul DiPasquale, who erected it on the beach in 2013. He described his support and enthusiasm for the addition. Finally, NCAC is in ongoing talks with the museum itself in an attempt to clear up confusion surrounding the mask: the message it conveys and the safety concerns the MOCA has had over its implementation.

This post will be updated as the discussion develops. In the meantime enjoy this Instagram photograph featuring Olek's crocheted work, mask included, and her own commentary on the situation:

Did you know that about 70% of the word's oxygen come from the ocean? Yes, Oceans are the life-support system of our planet, providing 70% of the  oxygen we breathe. Our oceans help regulate climate change and our weather patterns. Our oceans also feed and provide employment for over 2.5 billion  people around the world. My mission was to deliver the strongest work that would bring awareness to Mother Nature’s current disturbing situation; namely, the alarming state of our oceans. When you look at the statue of King Neptune, what does he symbolize for you? Do you think he’s happy with the current situation of the health of the oceans? Are there things that you can do in your daily life to help, like limiting your use of plastic bags and bottles? As an individual I know I cannot make these statements alone, so I invited the local community to participate by adding their voices to mine. If we all work together we can solve issues and make the world a better place. #Olek #teamolek #neptun #saveourseas #artivism #virginiabeach Thank you all for supporting notes!