Previous Next
Piercings ban student’s husband out of school dances.

Hubbard High School in Ohio is currently banning Casey Engstrom,19, from escorting his 17-year-old wife, Brittany, to any dances her senior year. The reason? Well apparently Hubbard High has a strict dress code policy against all forms of facial jewelry. 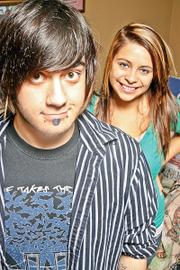 Casey offered to remove the jewelery but Superintendent Richard Buchenic said that Casey will not be allowed to attend for health reasons because the jewelery ““was not acceptable because fluids could still come out, and I do not want to subject our students to those fluids,” he said.

So one of the reasons I decided to post this up is that there is a very interesting quote at the end of the article that may prove that is more than just a dress code policy violation.

Buchenic said students or any other person would be held to the same standard being imposed on the Engstroms. He said Casey Engstrom will not be permitted to attend those school functions even if the hole in his lip is completely plugged.

Buchenic said the school will uphold its obligation to provide Brittany Engstrom with an education but is not obligated to allow her to attend dances with any particular escort.

“She chose to get married, so this is her decision. Going to dances is a privilege, not a right,” Buchenic said. “She could still attend the dances with friends.”

Casey Engstrom said Buchenic, during their meeting, defined him as living an “alternative” lifestyle.

“That offended me,” he said. “I live with my wife and two cats. How alternative is my lifestyle?”

Casey says there are religious aspects to him wearing the skin-stretching jewelery which he claims requires discipline and is practiced all over the world.

Casey saids, “This practice has been done worldwide. It’s outrageous that it’s still being discriminated against.” Casey considers himself a “Humanist.”

So who’s right here? Is this really a public health concern, religious discrimination or is there something more going here.

You can find the article right here. Also, check out NCAC for our stance on dress codes.