Previous Next
Penguins Under Fire

Once again, picture-book penguins have come under fire. In Ankeny, Iowa, parents of one kindergartner want And Tango Makes Three by Justin Richardson and Peter Parnell banned from East Elementary School. At the very least, they want the book moved to a restricted section of the school library.

Tango tells the true story of Roy and Silo, two male from the Central Park Zoo who hatch an egg and together parent a chick, Tango. Not only does the book teach kids about the behaviors of other species, it also promotes tolerance of different family structures that, in fact, exist. 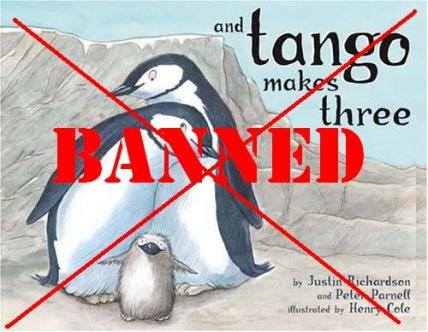 Some parents object to the book because they say it is not “age-appropriate,” but the term is too subjective to be very meaningful. In fact, “age-appropriateness” is often invoked to disguise objections to a book’s content and message.

Other parents want the book out of the school library because they say it conflicts with their personal values. They are entitled to their views, but they have no right to tell other parents what their children may read.

School board members meet again in December, when they are expected to decide on the fate of Roy, Silo, and Tango.