A display focusing on police brutality and community relations was taken down in Gloucester County, New Jersey after a high school received complaints from the local Police Benevolent Association. 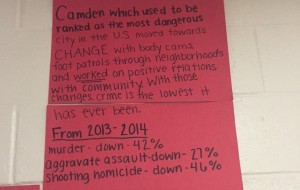 The display, part of an awareness campaign project in Clearview Regional High School’s humanitarian studies class, featured a silhouette of a person with raised hands and posters stating statistics on crime, brutality, and police in the community. It was, one student said in an interview, meant to converge the ideas that police are society’s protectors, yet are still human and are not infallible. The project does not, students note, defame the police or cast them in a negative light.

Still, the principal ordered that the display be removed – a knee-jerk reaction, perhaps – claiming that it was “causing a disturbance,” and the superintendent backed the decision, stating later that while he understood that the students’ intent was “to strengthen (not harm) police community relations,” the controversy “raises the need…to reevaluate our formal policies on class projects.” The debate within the school, or perhaps coming from outside the school, “disrupted our ability to conduct school operations in a normal matter.”

Isn’t healthy debate part of a rigorous educational environment? The humanitarian studies class, part of the high school’s English department, highlights social injustices around the world, ranging from poverty to genocide.. The award-winning teacher who designed the class, Jennifer Satterfield, said she did so with a focus on action, asking students to think about what they can do "to limit those injustices and promote justice for all human beings, whether they live in Gloucester County or Zimbabwe."

That doesn’t seem like a class that deserves to be censored. On the contrary – the school administration should be proud that there are students in their district who care enough to probe the horrid depths of inhumanity, shine a light, and work to do something about it.

Humanity is bound to repeat mistakes unless we bear witness to them. We need more kids like these who are willing to go forward into the world with open eyes, pledging to make it a better place — especially when there are some who object to their actions.