Previous Next
Read ‘Em and Weep: Quotes from a Real, Live Book Censorship Debate over Toni Morrison’s “The Bluest Eye”

The following may inspire tears of pride and/or rage, depending on your disposition. They are Change.org quotes from two petitions: one on each side of a debate over the use of Toni Morrison’s The Bluest Eye and other texts in Adams County, Colorado. 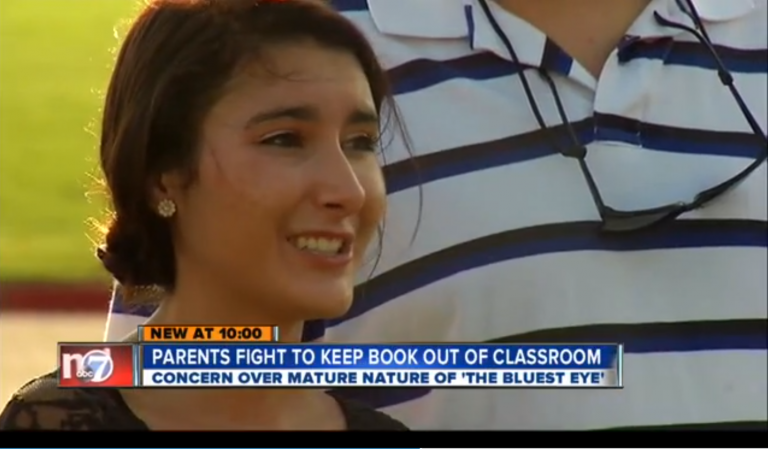 Bailey Cross, a student at Legacy High School, is combatting censorship in her district in Colorado

A group of Concerned Parents started their petition to remove this and other “bad” books, as part of their latest appeal to the school board. Few if any of the complainants have read the book in its entirety. This week, Legacy High School student Bailey Cross created a counter-petition after hearing about the censorship issue. (Though it had been going on for months, little to nothing was known about it.) In just a week, the petition has gotten 1000 signatures, most of them local.

The Bluest Eye was being used in Legacy High School’s Advanced Placement (you know, college-level) English Classes. It was on the District’s approved list of texts. You may have heard of Toni Morrison, a Pulitzer Prize-winning author and Nobel Prize laureate. Her books are taught in upper high school grades and college classrooms across the country.

A notice was sent home to students before the book was read to let parents and students know what they would be reading and why and an alternate assignment was offered to those who wanted it. Half a dozen students of about 150 opted to read one of the alternative texts and received instruction on those works outside of class time.

One of those students, Rachael Parks, still supports the right of other students to study The Bluest Eye should they wish, and even signed Bailey Cross’ petition to keep the book:

I chose not to read the Bluest Eye by Toni Morrison for religious reasons and had the same instruction with a different book. I did not feel excluded from the lesson in any way. I feel as though the situation was handled with sensitivity and consideration and did not take away from my learning experience. Rachael Parks, Thornton, CO

Here are some other heartening responses from those who signed the petition in favor of academic freedom:

Sheltering children from the ugly injustices of life such as misogyny and racism does not make those awful things disappear, it makes them more difficult to combat by not educating future citizens about what they are.  Petra Spiess, Westminster, CO

This is important to me because as a student, I’d love to be able to read freely in schools. Today so many parents are trying to shelter their children from critical thought, as well as adversity and the more sorrowful side of history. To me, this is more important than glorifying the happy parts of history, which in truth do not teach us very much. Bella M Northglenn, CO

Teachers are professionals and need to be treated like professionals, which includes their ability to choose appropriate instructional materials for students. This is especially important for college preparatory courses. Krista Morrison, Broomfield, CO

Sheltering high school students who are only a year or two from leading their own lives as adults from books that have “graphic material” is like putting a fish in the ocean and telling it that it must stay in a one inch by one inch perimeter. [Books] aren’t creating the problems: on the contrary, they are shedding light on them in order to destroy complacency with ignorance towards broken problems that surround us everyday. Lauren Yaussy, Northglenn, CO

I believe that the English teachers at LHS care deeply for their students. I trust them to treat the material with sensitivity, and to be reasonable if students choose to read an alternate book… which I trust will always be available. James Hammond, Westminster, CO

(NOTE: Alternative assignments and parental advisories were offered for this book. The concerned parents seem not to have made this fact clear to their petition co-signatories.)

There is no reason to introduce our young people to pornography via Toni Morrison. This is not the only filthy book she has written & managed to financially profit from via AP English classes. I will not support it. Wendy Bills Highlands Ranch, CO

This is not appropriate reading material for anybody, let alone students! Richard Smith, Thatcher, ID

This a topic better discussed in health in a more tactful manner. Reading about this could promote the act instead of preventing it. Zack Ivie, Broomfield, CO

There is no educational value to this type of trash literature. I wouldnt have this type book in my home, why would I want my grandchildren reading it in school? Values begin at home and should not be over ridden by some teacher who apparently has none.
Linda Reynolds, Broomfield, CO

I would be outraged if my children had to read literature in school that was not wholesome and prudent. Leisel Decker, Mesa, AZ