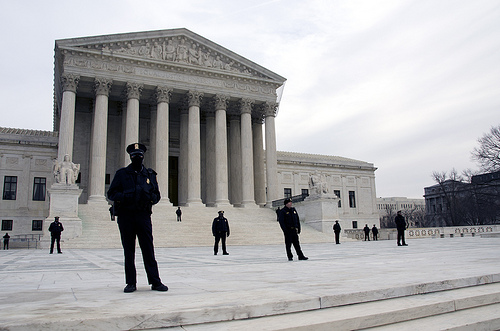 The Supreme Court has a troubled relationship with the First Amendment and that’s not even talking about what goes on in the courtroom. Since 1949, federal law has broadly prohibited demonstrations within the Supreme Court building and grounds. That restriction came under fire last Tuesday when Judge Howell of the Federal District Court for the District of Columbia ruled that such a blanket prohibition on demonstration was unreasonable and over-broad and in violation of the First Amendment.

While the Supreme Court has an interest in allowing visitors to enter and exit without being blocked by protesters, creating a First Amendment-free zone is not an acceptable way to accomplish that goal, Judge Howell reasoned.

Two days later, the Supreme Court responded by instituting a building regulation prohibiting, under threat of criminal punishment, “demonstrations, picketing, speech-making, marching, holding vigils or religious services and all other like forms of conduct that involve the communication or expression of views or grievances, engaged in by one or more persons, the conduct of which is reasonably likely to draw a crowd or onlookers” within the Supreme Court building and grounds.

Let’s first clarify exactly what this regulation isn’t, so we can see why it is so problematic:

When it comes down to it, there simply isn’t a compelling reason in favor of the Court’s blanket prohibition on demonstration. The new regulation has much the same effect as the 1949 law: it significantly—and unjustifiably—limits the First Amendment rights of anyone who might want to air their grievances to the Supreme Court.