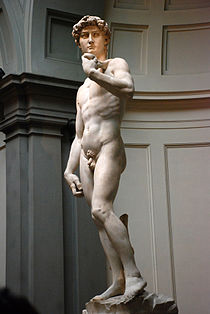 Well, it’s all in the eye of the beholder and controversies over nude sculptures are frequent (here is one from Kansas). But whether a viewer sees a nude as arousing is pretty much up to him or her. The art question seems to have been settled a while ago. Can anyone claim that the following image, realistic genitals and chiseled physique notwithstanding, is anything else but art? How many children has Michelangelo’s David corrupted? Kudos to the administration of Discovery Park for standing by the (really cool) artwork!