Previous Next
Nude Sculpture Removed from Public View in Michigan

This week, “Walking Man,” a sculpture of a nude man, was removed from the public space in front of the Anton Art Center in mount Clemens, MI, because of individual complaints. That city officials should respond to the complaints of a few vocal community members by removing an art work from a public space is a disturbing violation of both the artist’s free speech rights and the rights of the public to have access to a wide variety of artistic expression. The personal prejudices of a small minority, who think that representations of human body are shameful, have now been illegitimately imposed on the whole community. Are Mount Clemens officials aware that the Constitution bars them from pandering to the special interest groups and imposing their taste and moral beliefs on the public? 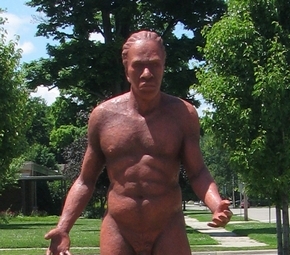 Sculptures of nudes, which grace public buildings and city squares around the world, mean different things to different people: to some they signify the beauty and dignity of the human body, the visible externalization of spirit, to others they remind of the sins of the flesh. The latter persistently try to remove any representation of nudes from public view claiming they are offended or that (against all evidence) children would be harmed by seeing a nude. Each person has a right to hold and express their beliefs, of course, but not the right to force those beliefs on a diverse contemporary public by dictating what public art is appropriate and what is not.