Students Speak Out on Teacher Layoffs

Previous Next
Students Speak Out on Teacher Layoffs

It’s not every day that students’ voices are heard concerning school policy. Indeed, most major decisions in public education are made with little or no student input. But with teacher layoffs pending in school districts across the nation,  hundreds students in Los Angeles sought to change that dynamic last Friday, staging a walkout to protest plans to fire more than 2,000 teachers in their district.

The LA Times reported: “The largest demonstration involved about 450 students from the Santee Education Complex, who marched three miles to the downtown headquarters of the Los Angeles Unified School District.” There was also talk of boycotting the state standardized testing scheduled for next week. 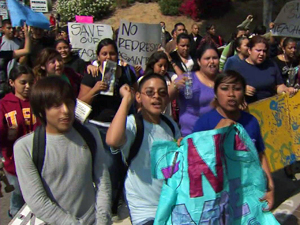 Superintendent Ramon Cortines had this to say: “Walking out and coming to the district headquarters will not affect the budget in any way or prevent the layoff of individual employees.”  He also made the decision not to bus the students back to school, as had been the practice with previous walkouts.  In another response, Santee Principal Richard Chavez said that students from his school participating in a boycott could loose privileges, such attending next week’s prom. 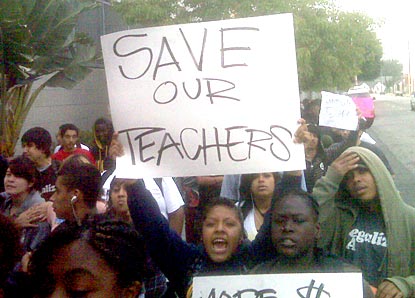 It is unfortunate that these administrators feel compelled (perhaps by their respective positions) to offer such reserved, even dismissive responses to what appears by all accounts to be a rather impassioned student plea for the state and city to not divest so dramatically from the public school system.

One can  debate the effectiveness of  a walkout or test boycott as tactics in this particular situation— and maybe Superintendent Cortines is right, that such measures won’t effect the budget (this time) — but should we not be celebrating these students who care enough about their own education to speak out in such a strong way, to risk disciplinary action (and even the prom) in efforts to catch the attention of policy makers, to say, “don’t fire my teacher, I want an education.”  And I would venture to go one step further–more than celebrate them, those making these “difficult decisions”  should incorporate these student voices into the decision making process.