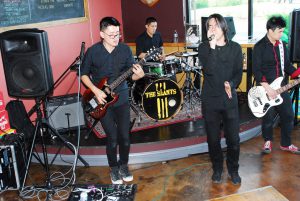 In an important free speech victory, the Supreme Court this week announced their final decision in the case of Lee V. Tam. The Asian-American rock group The Slants now have a First Amendment right to trademark their name after their petition was rejected by US Patent and Trademark Office (PTO) on the grounds the name “disparaged” a group of people, namely Asian-Americans.

As we've previously blogged, the PTO's decision against The Slants' request cited a provision in the Lanham Act (1946), which gave the PTO the power not to register potential trademarks that “may disparage […] persons, living or dead, institutions, beliefs, or national symbols, or bring them into contempt or disrepute.” Simon Tam, The Slants' guitarist, appealed the decision to the US Court of Appeals for the Federal Circuit, underlining the free speech flaws with the Lanham Act. The appeal argued that the PTO's decision constituted an unconstitutional act of viewpoint discrimination and thus infringed the band's First Amendment rights. The Court of Appeals agreed, arguing government cannot refuse to register a trademark “because it disapproves of the expressive messages conveyed by the marks.” The federal government appealed the Court's decision, leaving the final decision with the Supreme Court.

The Supreme Court's ruling strikes down the disparagement clause in the Lanham Act, which allowed government to limit or punish what officials deemed to be offensive speech. Indeed, according to the ACLU, the initial decision to deny The Slants trademark came after a PTO official googled the band and discovered its members were Asian American. The official thus deemed the name a racial slur and denied their application, despite the band choosing the name in order to transform something derrogatory into, in the words of Simon Tam, "something that was powerful, something that was considered beautiful or a point of pride instead."

Of course, the Supreme Court's decision will have consequences outside of the Lee v. Tam case, permitting 'disparaging' trademarks that lack such a compelling justification for their selection. Indeed, the ruling will also have an effect on the high-profile case of the Washington Redskins, the football team who were denied a trademark of their name because of its use of an outdated and offensive term for Native Americans. Worse still, trademarks that are outright racist will now be permitted, with the individuals who register the trademarks able to profit off of derogatory ideas.

What matters, however, is the basic free speech principle exemplified in the ruling: that more speech is better than less. Denying an overtly racist or derogatory trademark will do nothing to combat the beliefs and ideas it espouses. In fact, as Catherine Rampell has noted in the Washington Post, "censorship tends to generate more public interest, not less, in whatever message is being censored." This is evident in the case of Lee vs Tam ( who now bill themselves as 'The Band Who Must Not Be Named') and will inevitably do the same in a darker story, for example, giving a racist trademark the allure of the forbidden rather than exposing it to the marketplace of ideas.

The ACLU's Lee Rowland writes, once exposed, our response should be to call these ideas out, to "boycott companies that make products that offend us, and ensure our spending reflects our values." As NCAC has previously noted,  “the suppression of noxious ideas does not defeat them; only vigorous disagreement can counter toxic speech effectively.”

David Cole, a former Georgetown Professor and now national legal director at the ACLU has written that “in a democratic society the only speech government is likely to succeed in regulating will be that of the politically marginalized.  If an idea is sufficiently popular, a representative government will lack the political wherewithal to suppress it, irrespective of the First Amendment.  But if an idea is unpopular, the only thing that may protect it from the majority is a strong constitutional norm of content-neutrality.”

As evidenced by the misguided decision made by the PTO with The Slants, in our society, racist ideas and slurs are sufficiently unpopular to be suppressed by the government. However, it's worth remembering periods of history when the ideas and principles upheld in our culture were marginalized, such as the civil rights era. Given our current political climate– when discourse around minorities and immigrants has coarsened and attacks on the press are increasingly commonplace– we'd be wise not to take the protections afforded by the First Amendment for granted and to protest unconstitutional government action, as The Slants have successfully just done.