Previous Next
Terminated for Reading an Allen Ginsberg Poem?

To hear many students and colleagues tell it, David Olio is a wonderful high school English teacher. 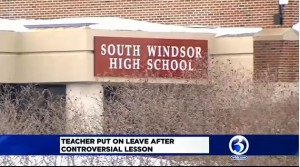 In February two students complained about an Allen Ginsberg poem that, at the request of a fellow student, was shared in Olio's AP English class at South Windsor High School in Connecticut. A media uproar followed, and Olio was essentially forced to resign.

Most of the facts do not appear to be in dispute – and are more nuanced than the 'students forced to read shocking homoerotic poem' media narrative. The overriding question is whether a celebrated teacher with nearly two decades of experience should be forced from the classroom for a single decision – even if one views that decision as a lapse in judgment.

During a class discussion of gratuitous language, a student raised questions about the Ginsberg poem, "Please Master." The piece was undoubtedly relevant to the discussion; it is also an exceptionally graphic account of a sexual encounter between two men.

So it is not shocking that the story quickly became fodder for local media. "South Windsor Teacher Reads Graphic Poem About Gay Sex to Classroom" read one headline, with the story saying students were "subjected" to the poem. A TV newscast warned viewers the piece was "too graphic to detail in almost any part," and bizarrely noted that the local police were not involved in the investigation.

School officials reacted swiftly: Olio was suspended immediately while the board started its investigation. Scores of current and former students and co-workers spoke up in his defense, but in April he bowed to pressure to resign.

It would take weeks for more thoughtful articles to appear. In Slate, Mark Joseph Stern wrote that while "Please Master" is "discomfiting and profane, an explicit account of a fantasized sexual encounter," one should bear in mind the audience, and the literary meaning of the piece:

This isn't kid stuff. But these weren't kids; they were 17- and 18-year-olds less than a year from college. And as graphic as “Please Master” is, it’s certainly not obscene or lacking in artistic merit.

A piece in the Daily Beast teased out some of the broader implications for public education, arguing that some see it as emblematic of "a changing culture around education, one in which teachers are on a hair trigger vulnerable to losing their livelihoods."

One of Olio's former colleagues, science teacher Clyde Selner – who described the poem as "a repulsive ode to sodomy" – argued that Olio "is one of the best teachers I ever worked with. He is committed to the school community and as an educator personified South Windsor High School's mission, vision and expectations statements."

Or consider the account from a parent at the school, who described the school board meeting to discuss the Olio case as watching "person after person, including present students, speak about how inspirational Mr. Olio is as a teacher."

I feel sorry for the future students who will miss the opportunity to be inspired by Mr. Olio. I also feel sorry for the remaining teachers who will undoubtedly feel like they need to censor themselves, even at the collegiate class level, in light of the one strike and you’re out policy we appear to have adopted.

That would appear to be the most dangerous lesson that might be learned from the Olio saga.