The Election and Our Fractured Public Sphere

Previous Next
The Election and Our Fractured Public Sphere 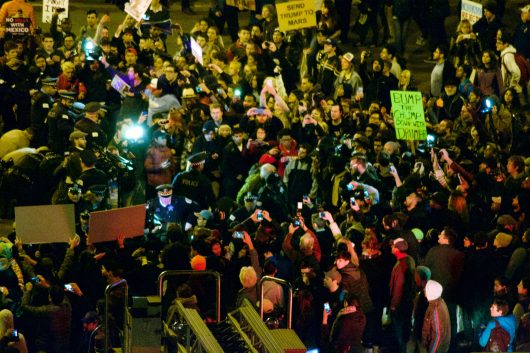 An anti-Trump protest in March

The nationwide surprise that met the results of the recent election reveals a fractured American public, living in echo bubbles where beliefs are confirmed and re-confirmed. Anyone who challenges those beliefs can be – and most often is – blocked, turned away from, unfriended. The political other is imagined as irrational, wrong and even morally suspect, but never really listened to. It may be pleasurable to do so, but it leads to a nation split by racial, gender, class and ideological strife. Then, one morning, we wake up in disbelief, because some 60 million of our fellow citizens have elected a presidential candidate who was supposed to have no chance of winning.

As one of the oldest free speech organizations in the country, NCAC understands the increasing need to work not only reactively to counter censorship, but also proactively, to promote speech and conversation around issues that provoke conflict.

Tolerating opposing viewpoints does not mean agreeing with them. But when, rather than offering reasoned disagreement, the opposing side demands its opponents to just shut up because their views are “unacceptable,”  “offensive” or just wrong, any opportunity for conversation is lost. When a university radio station does not allow an author it has invited to read a sentence that expresses a view contrary to that of the student producer, an opportunity is lost; when a museum or an arts program cancels or paints over a public work of art because its controversial content may offend, an opportunity is lost; when a city paints over a mural or an art museum disinvites a speaker because of unorthodox representations of race, an opportunity is lost.

When one side is silenced there is no possibility to have any kind of argument, no possibility of finding ways to build common ground. We remain fractured and increasingly antagonistic.

It may be difficult to hear silence amid the clamor of activists on every side advocating for multiple causes, but it is precisely this silence that we need to discover. I am talking about the silence that can be found beyond the campaign slogans and social media hashtags, the silence that can give us a way forward: for a reasoned debate, for a conversation between people who disagree but are willing to also listen and explain why they disagree.

There is no magic bullet that will make us listen to each other while we disagree, but one step in that direction is to begin to reconstruct a true public sphere – one where ideas and viewpoints can be shared across ideological divides, where we can argue passionately and question opponents, but not merely dismiss them.