Illustrations that “Crossed the line” in The New York Times 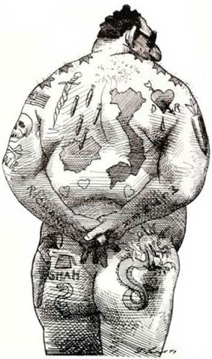 AlterNet reports on a new book by Jerelle Kraus, the former art director of The New York Times Od-Ed and editorial pages, that details the censorship of editorial illustrations in The New York Times. The book All The Art That’s Fit to Print (And Some That Wasn’t) contains 320 illustrations, by the likes of David Levine, Milton Glasser and Saul Steinberg, that The New York Times commissioned only to get cold feet and pull them before publication, paying more than $1 million in “kill fees” over the years.

Although Times management believed that the pen was mightier than the sword, it had an uneasy suspicion that art might be more brutal than the pen. This resulted in weird, last-minute censorings – especially of caricatures of famous people, against which there was a puzzling, long-standing prohibition. “You could write it, and be as scathing as you liked,” Kraus says, “but you couldn’t draw it.”

Some examples of images that were censored include illustrations of sitting presidents (Clinton and Bush) even when they accompanied scathing editorials, or images in which editors imagined sexual innuendos, like this harmless Milton Glasser drawing of a boy kissing an alien: 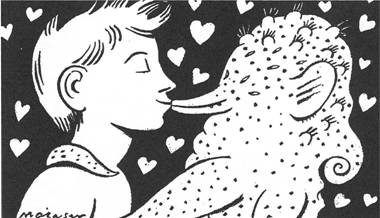 According to AlterNet, Kraus left her longtime stand as art editor at The New York Times in order to publish this book, and, in exchange, “The Times is spitefully refusing even to acknowledge the book’s existence, let alone actually review it.” But that doesn’t stop you from reading it! To see more images that were deemed too racy or inflammatory for The New York Times visit AlterNet or check out the book itself.