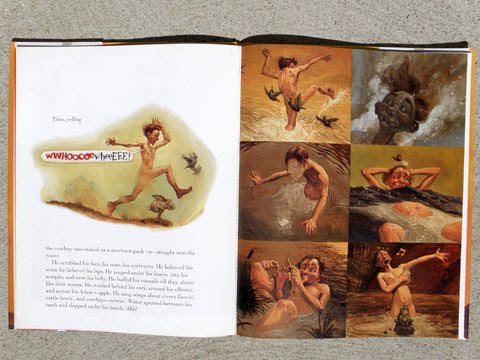 We were able to chat yesterday with Amy Timberlake, the author of The Dirty Cowboy, (illustrated by Adam Rex). The book that has been at the center of a censorship debate outside of Hershey, P.A.. Two parents of a child at an elementary school objected to the nudity of the cowboy, calling it pornographic. Most likely hoping not to rock the boat, the Annville-Cleona School Board subsequently voted to remove the book after a review.

Timberlake spoke out against the censorship on her blog and our Kids’ Right to Read Project has joined their voice as well, writing a letter to the Annville-Cleona school board which urges the return of the book.

NCAC: The idea for this book came from a story your grandfather used to tell you as a child, is that right? Tell me about your inspiration to write this book…
Amy Timberlake: Yes, The Dirty Cowboy is a story my grandfather used to tell us when my brother and I visited my grandparents in the summer. But here’s the crazy part: the story goes back even further than that. My grandfather heard the story from my great-grandfather who was a newspaperman for the Silver City Enterprise out in Silver City, New Mexico. This was a story that was supposedly reported by my great-grandfather in the local paper.

So it’s a story that’s been passed down through several generations of my family. To be absolutely truthful, I’ve made the story into more of a tall tale. Also, the dog and the cowboy make up in my version. In the original, the cowboy left the dog sitting by his clothes and walked back home bare-naked because there was nothing else to be done — the dog would not let the cowboy take those clothes.

The book has been removed from a public school library in Annville-Cleona P.A.–is this the first you’ve heard of problems with the book? If not, what responses have you received in the past or what other instances of challenges to the books are you’re aware of?

This is the first time I’ve been directly involved in this sort of thing (due to social media, etc), but it’s not the first time it’s happened. A few years ago, I happened upon an ACLU Report that said the book had been banned at a school in Texas.

And early on (2003 — the year it was published), I got an email from a librarian saying that she had received the books she’d ordered for a library, but now that she’d seen the book she had to throw it out.

This was despite the fact that tax dollars, and a well-organized process had been used to purchase the book. For me, the email was upsetting because there wasn’t really anything to be done. I did my research to see if there was a way to complain, but there wasn’t.

My publisher said they’d see if they could donate books to the organization, but I’m sure it was a lost cause. I’ve heard since that people simply losing, or tossing books is the most common way books are banned.

I do think that tax payers deserve better than that, and I am happy that in this case in Annville-Cleona, the librarian was courageous and brought the issue into the public eye. People say that banning books is good for the author because the publicity promotes sales (and in this most recent case people have been buying my book) but if books are simply thrown away no one knows.

I suspect this is the most common way books are banned. This silent book banning is something that everyone needs to know about.
Some have suggested that the title of the book, which refers only and unequivocally to the physical filth of the protagonist, is intentionally provocative. Did you think about this “dirty/dirty” parallel?

Ha! Yeah, I understand what you’re saying here, but no, oddly enough I never did. In my family — for as long as I can remember — we always asked for the story by asking for the one about “the dirty cowboy.” So of course I never considered calling the book anything else. And it is about a bath with dirt playing a significant part in the plot. Read it for yourself and see if you don’t agree. It’s an apt title.

What is your response to protective parents who balk at the images of the semi-nude cowboy? Those who in some way link it to pornography or make it sexual?

Well, as far as parenting goes, I don’t pretend to know what parents should or should not do. Parenting is a hard job and I think we need to give parents a break. They do the best they can. (I know my parents did.) So if a parent doesn’t want to read my book to their child that’s absolutely fine with me. I’ve got no issues with parents.

What I don’t think is right is when a book is removed from a library that serves lots and lots of kids and parents simply because one or two parents doesn’t think it’s right for their child (and their particular parenting style). That doesn’t seem fair. And when you consider that everybody’s tax dollars went to purchase the books, it isn’t right for that to happen.

To answer your other question: It’s a book about a bath. That doesn’t seem pornographic to me. Removing clothing before bathing seems like good hygiene… or at least that’s what I was taught.

What, in your opinion, are the dangers of censorship and removing books from children’s reach just generally?

If one or two parents can get books removed from a public library, where will it stop? Will there be any books left in the library? I tell you, everybody has opinions about books, and everybody has gotten offended now and again by a book. (If you haven’t, you’re not a reader.) It doesn’t mean the book shouldn’t be on the shelves.

Anyway, this is one of the reasons we hire people with special training to care for our libraries. Librarians have a process for choosing and buying books for everybody (and in the case of schools, these books also support the teachers’ curriculum).

It’s one thing to free shelf space because a book is not being checked out, but it’s quite another to have a well-used book banned because of the objections of a few parents. Of course those parents have a right to object, but there needs to be a good process in place to handle that objection.

In this most recent case in Annville-Cleona, they did have a process, but what it meant was that one or two parents could officially object and then suddenly an elected board was deciding whether or not to keep the book — so guess what they did?

They banned it. If the school had had a process that required those parents to collect say parents of 50 current students who also agreed that the book was objectionable, my book would probably still be on the shelf.

I think it’s fair to ask the objecting parents to do the work of gathering signatures proving that these are the wishes of the community who bought the book with tax payer money. In addition, it would have saved the elected board the embarrassment of this situation. Right now, the community seems upset about the banning — which can’t be good for elections.

So the issue for me is having a good process in place for this sort of thing. Books are bought carefully for everyone, and as much thought needs to be given for their protection.