Then and Now: Out Loud and Proud

Previous Next
Then and Now: Out Loud and Proud

No one knows exactly why Andy Warhol’s only public work, “13 Most Wanted Men,” was censored fifty years ago this month at the 1964 World’s Fair in Queens, New York. Initial press reports said it was Warhol himself who didn’t like the work. But that was not the case. Yet, no other rationale was offered. The reason remained unspoken – or perhaps, it was simply “unspeakable”?

The double-entendre of “Most Wanted Men,” and the way these handsome bad guys gazed at one another, suggested a homoeroticism that would not have been obvious except to those who were following Warhol’s work at the time. Yet, even if that was a reason for the removal of the work, the taboos surrounding any reference to homosexuality would likely have made it impossible to declare this as the official reason.

The hush-hush surrounding gay culture in the ’60s and earlier was confronted by the very public 1969 riots at the Stonewall Inn, which began a civil liberty movement, a crucial part of which is the ability to speak, to protest, to assert one’s sexual identity. Silence, before the AIDS movement associated it with death, was a form of identity erasure, which translated for many into denial of “unspeakable” desires, personal misery, and even suicide.

“Most Wanted Men” resurfaces at the Queens Museum this summer  in time for Gay Pride Month, a celebration borne from Stonewall and the history of oppressed gay speech. Today’s pride celebrations provide a measure of how far we’ve come with open discussion on sexual orientation. Resistance to “gay silencing” is no longer met with police batons and pepper spray, as we saw earlier this year when students in South Carolina made their objections to the removal of gay-themed literature heard with organized, peaceful protest and rainbow knee-highs. 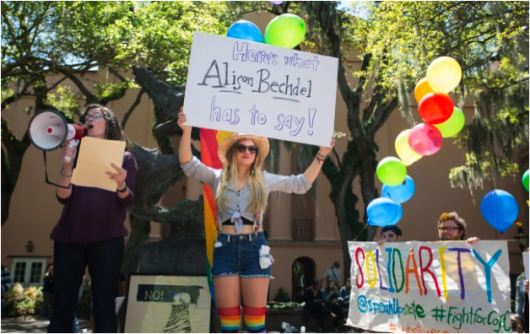 The difference between censorship then (1964) and now (2014) is that the silence is over! Censors still regularly attempt to silence books or plays that they claim “normalize” homosexuality, but the debate is loud and outspoken. NCAC may not succeed in reversing every individual case of censorship, but we sure raise hell!

We can be glad that the gay subtext in “13 Most Wanted Men” is just one of the many reasons that make the piece a fascinating historical leftover, just as the silencing of gay resistance, and soon, the need for any LGBT resistance, becomes a relic of the past. Until then, help us expose the people who wield their personal beliefs to punish LGBT speech.