Virginia Student Speaks Out Against School District’s Prior Restraint Policy 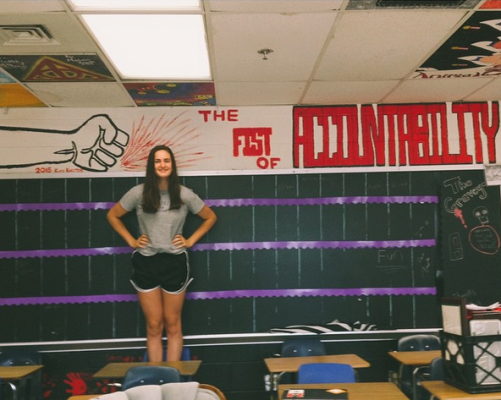 A Virginia high school student is taking a bold stance against her district’s prior restraint policy on the school newspaper.

Kate Karstens, 17, is a senior at George Mason High School in the Washington suburb of Falls Church and is a passionate student who loves to learn. "I get to sit in a classroom for eight hours a day and learn for free," she exclaimed. "Can you imagine a better day?" She is also the editor-in-chief of her school’s newspaper, The Lasso, and has repeatedly been frustrated by Falls Church City Public Schools School Board Policy 9.46, which allows the principal to vet the paper’s articles prior to publication.

In a phone call with NCAC, she described several cases in which school officials have pulled her newspaper’s investigative pieces.

On June 8, for instance, Ms. Karstens published a story about the chronic absenteeism of the high school’s senior class. For the piece, she interviewed George Castillo, then a senior with 137 absences. Mr. Castillo, the son of the school board chair, told her that he did not believe his numerous absences affected his academic performance.

Although Mr. Castillo gave Ms. Karstens permission to use the 137 figure in the story, school officials claimed it violated his privacy and removed the story from the internet. Ms. Karstens sought to republish her article without the number, but school officials then asked her to remove Mr. Castillo’s claim that the absences did not harm his academic performance. Ms. Karstens rightly refused, and the school reluctantly restored the article to the website.

Ms. Karstens believes the school’s attempt to censor her article about absent seniors violated the school’s prior restraint policy, which specifies that only articles that discuss the death of community members, criminal activity, discipline, drugs, sex, alcohol, tobacco, and violence are subject to review. “I put in so much work,” she said. “I did the research and interviewed the right people. They shut it down because they didn’t like the people I interviewed.”

In an earlier incident, another student journalist wrote a story about graffiti in school restrooms and tweeted an illustrative photograph. Unbeknownst to the journalist, the perpetrator was in the meantime identified and caught. The school then removed the tweet from the internet out of fears that the parents of the perpetrator would sue the school for violation of privacy, despite the fact that the tweet never mentioned the perpetrator’s name.

Ms. Karstens condemns the prior restraint policy for stifling her newspaper’s reporting. “There are some subjects that we know will get censored, so we don’t even try,” she said, recalling an attempt to report on the non-punishment of a star football player who was caught with alcohol on campus. She also mentioned she wants to report on her school’s abstinence-only education policy but has been deterred from doing so because of the policy.

Despite these setbacks and with the support of her journalism teacher Peter Laub, Ms. Karstens has emerged as a passionate voice for free press and has vowed to work for the repeal of the school’s prior restraint policy. In addition to meeting with school board members and outside advocacy groups such as the Student Press Law Center, she has written an editorial in her local newspaper calling for its repeal. She plans to testify in front of the school board to encourage them to follow the model of states like California, Illinois, and Maryland all of which have passed legislation forbidding the prior restraint of student newspapers.

The Youth Free Expression Program is in the process of writing to the Virginia district in support of Ms. Karstens and The Lasso.