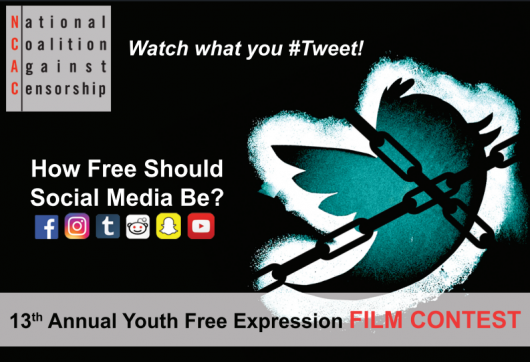 The winners of the 2016 Film Contest were:

Our distinguished and generous panel of judges included:

Ed Winkleman, Co-Founder of Moving Image, an art fair featuring moving-image based artwork such as film, video, and virtual reality.

You can watch the twelve finalists’ films and read their artists’ statements below!

The film “censored.” shows my view on what censorship means to me. Social media should be a place where people are free to speak and express themselves. As someone who wants to create and share without limits, social media puts up a wall. We are suddenly stopped from sharing to our utmost potential. When we are faced with a set of rules, a creative process starts to turn into, “Can I or can’t I?”. The answer should always be, “You can!” To be able to keep my video short and informative was crucial. Including the historical origins of censorship was my way of saying that censorship has not evolved much over the years. Using examples that many people can both agree and disagree with, including myself, “censored.” demonstrates multiple reactions to what is shared on social media. People will always have their own opinion. The real issue isn’t who posts; it’s allowing anything and everything to be shared, no matter if one agrees or disagrees with it.

In the beginning, the sky represents time change and the blindfolded people represent the future of a dystopian society. The political speaker motions the changes of the future of society for the censor of social media everywhere. The main female character is then entered into a incorporation called ‘Ant-Media Incorporation’ where they keep security around neighborhood and communities to prohibit any social media responses. She goes to work when she unexpectedly finds a valuable flash-drive as she breaks into it without knowing it was from a confidential government safe. She later is declared for probation for interfering with top confidential information that with-holds any social media distribution to the public. As she sits in the middle of a dark room she feels doubtful for her ‘wrong’ doings when she later realizes the truth about government and society censorship. She breaks loose of the chains and removes her blindfolds to convey that blindfolds are like censor bars that prevent individuals from seeing self point of view and voice.

With All Due Respect, Detective. By Preeya Dave, North Brunwsick, NJ

My film, With All Due Respect, Detective, is a satirical/parody piece about the exaggeration of speech censorship on social media. This film utilizes common characteristics of old school detective films/shows to highlight how much today’s censorship situation relates to that of the McCarthy era. The film’s purpose is to characterize the real freedoms we are guaranteed as citizens in a democracy and how the banning of people or ideas off of social media without a blatant reason is reckless and is stripping our liberties away. The character Peggy simply posted a negative opinion about a restaurant she dined at and it is fully exaggerated with the introduction of a police task force. This film could possibly relay the setting stones for a more sophisticated take on the censorship of what people are allowed to say online for the near distant future.

Behind this video I intended to explain how the media has recently been censoring people, and further show how our right to free speech is important. Stating that social media should not be limiting our speech even if it may be offensive. I started off with these points in mind, because this is something I often think about. I was considering having the video be text-animation styled but I went with the clip style because I figured it fit better because including examples got the point across effectively.

Making this film I encountered problems with video quality, many of my clips would buffer so instead of manually recording clips I opted to use a clip converter. This ensured that everything would be high quality. Surprisingly it did not take me much time to decide which clips I would use, and each get my point across well. However, what took me the longest was polishing up everything, making sure transitions, zooms, music timing, and such all looked professional. Polishing often takes a while, since I often am fixing many small details. I am satisfied with the overall quality of the video. I put in time for the script, timing, clips, and transitions. Normally I quickly edit, but I took my time for this one and it payed off.

Overall, I really enjoyed making this film. Editing is a great passion of mine, and any opportunity to edit, especially for a scholarship I will gladly take. The more I edit, I find the more I learn and the more I love it. Thank you for this opportunity to create this video about a topic I am passionate about, by doing what I love.

A boy living in a dystopian society does not wish to conform to their laws about engaging in social media. He is fed up with how people are treated online, and wishes to live a life without social media. His sister decides that it is just easiest if she conforms, and although she doesn’t really want to, she filters through the hate and negative comments.

I’ve recently been experimenting with drawing, film, and animation and have been very pleased with the finished products. All the aspects of the film are created through trial and error since I’m still fairly new at this, but I hope to continue making videos similar to this.

The content itself discusses the importance of the first amendment, but also the negatives of hate speech. With this compromise, I completely support freedom of speech, but emphasize respect in online communities.

For my movie I had to do a lot of research, to understand what people mean by censorship, and I came to the conclusion that sometimes people use freedom of speech to abuse and oppress each other; however, I think freedom of speech is a privilege and we should not use it to offend others. Even more in social media where everybody uses it to help communicate with others, I think we should try to share a positive and nice atmosphere where everybody should feel like they can express their feelings without hurting others. Therefore, we as people should try to make this change happen, and more we should not let the government control our freedom of speech. Ultimately, we need to take responsibility as individuals for what we post and really think about how we affect others. So I used a variety of Twitter tweets I found when I searched hashtags like #nobannowall, #love, #freedomofexpression, and more. I used image and text, to express my creativity and speak out against censorship on social media. I wanted to show how people’s tweets can affect others and how the message they’re trying to pass can have either a positive or negative impact on others.

“The Uncensored Truth” follows a young boy bombarded with information from the internet. It is a commentary on the increasing accessibility of disquieting news on the internet to young children, primarily offered through the platforms of social media. However, what this video also emphasizes is the importance of educating children about the world they are growing up in. In world where social media often serves as a primary news source, teaching children how cultivate a responsible social media presence is paramount. My ten year old brother, the star of the film, has spoken to be about how confusing it can be to be exposed to the fast-paced world of social media, but how necessary it is to access this platform in its unfiltered form in order to stay fully engaged with the world around him. To raise conscientious members of society, we cannot shield our youth from the realities of life today. Furthermore, attempting to censor a child’s experience prevents him or her from experiencing the positive ways in which society is responding to challenges to its conscience. Progress requires both an understanding of the past and the present. If children are not allowed to fully experience the present, they will never live up to their potential and capacity as the agents of change that is so desperately needed to heal our broken world.

Social media has given society the freedom for anyone and everyone to express their ideas and opinions. However, this freedom has also made us more sensitive to the types of things people say online. Social media websites often censor their content so as not to offend users. The problem is that that censorship takes away someone else’s freedom to express themselves just to make others more “comfortable” online.

By making this film, I wanted to bring attention to everything we lose when social media is censored. I decided to make a stop motion film to explore this topic. Each picture takes up only a tenth of a second, but every one of them is vital to experience the entire film. The loss of one picture would leave a gaping hole in the narrative. In the same way, censorship in social media takes away vital “frames” of information that are essential for a complete and well-rounded understanding of the world and its different perspectives.

My film is reflecting a sort of real life way censorship works. These people are blocked from expressing their opinion and posting or creating what they want, even if it’s not entirely bad. This short film is about the creative boundaries that censorship creates.

Why I Stand. By Elliot Rico, Ewa Beach, HI.

My main focus for this film was to touch onto minorities and oppression while focusing on how the censorship on social media can sometimes keep things from advancing. In incidents such as the bombing in Aleppo, there was not enough media coverage when compared to the bombing in Paris, that’s because of how people react to things when minorities are included which means they are not as recognized or familiar. Everyone deserves to have a voice in social media, no matter their opinion.

No Matter the Cost. By Elisabeth Shortall, Coventry, RI.

This satirical short “No Matter the Cost” observes two opposite ends of the spectrum involving the topic of censorship on social media. My short was set out to show the black and white thoughts involving censorship. Although my video shows one end of the spectrum with the male character wanting everything that could be offensive censored, and the other end shows how nothing should be censored since every individual has the right to speak his/her mind, in reality, the topic of censorship is very gray rather than black and white, as it is displayed. By exaggerating censorship into a matter of life and death, people come to realize that a few offensive words are not a big deal when compared to death, which ironically, Joe’s character merely brushes off.

When I first found the contest online around mid-December, I immediately made a script and made small adjustments, working all the way up until mid-February, when I was able to film my wonderful actors, Joe Lachance and Hannah Lanoue. Making this film allowed me to put my skills to the test. Though I have been making videos since around 2012, I really wanted to push myself to make an awesome video I could take pride in, thus educated myself much more regarding all aspects of film, as well as using a more advanced editing system. In doing so, I had the ultimate goal of being able to better spread the message of using your voice no matter the cost.