What You Need to Know About the Arizona Mexican-American Studies Trial; UPDATE: Judge Rules Ban Unconstitutional

Previous Next
What You Need to Know About the Arizona Mexican-American Studies Trial; UPDATE: Judge Rules Ban Unconstitutional 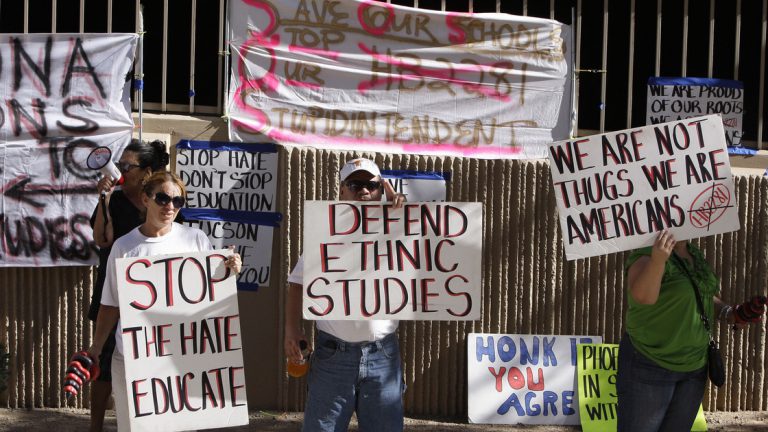 UPDATE 8/23/2017: The judgment is out: Arizona’s law banning classes “designed primarily for students of a particular ethnic group” was enacted and enforced with racist intent, making it unconstitutional.

After a lengthy trial, Judge Tashima wrote in an interim opinion yesterday, that the Arizona Superintendent’s office violated the First and Fourteenth Amendment when it penalized – and thereby terminated – a Mexican-American Studies program found to be in violation of the law.

He also found that the racist ban was “a political boon” to former state education officials Tom Horne and John Huppenthal, who both campaigned for public office on the success of the law and won, despite their racist public statements.

NCAC (and dozens of free speech advocates) spoke out against the ban in 2012 and has since been following efforts to reinstate the Mexican-American Studies program in Tucson.

As yet, it is unclear how the court’s finding will be enforced and how the Mexican-American Studies program will be affected. Stay tuned for a final judgment assessing the appropriate remedy and catch up on the facts of the trial below.

Tomorrow, a two week trial in Arizona to decide whether the cancellation of a Mexican-American studies curriculum in 2010 was discriminatory is scheduled to conclude.

For five years now, NCAC has been following the efforts of teachers and students in Arizona to overturn a 2010 state law that banned a Mexican-American Studies program at the Tucson Unified School District (TUSD).  The law bans classes that “promote resentment toward a race or class of people,” are “designed primarily for pupils of a particular ethnic group”, or “advocate for ethnic solidarity instead of the treatment of students as individuals.”

At issue in the trial is whether the law and its enforcement against the MAS program violated the constitutional right to education free of discrimination and viewpoint censorship.

Regardless, as NCAC’s new Executive Director said when the law was first challenged: “Whatever the outcome of legal proceedings, (suppressing the program) is harming students, whose education should be the primary concern of elected officials. Instead (lawmakers) are putting politics and ideology ahead of the well-being of young people.”

The history of the case is lengthy – this is the second trial in 3 years – but here are the five essential facts:

State officials cannot pass or enforce laws with partisan, political, or racial aims that disproportionately affect groups that have been historically subject to discrimination.   That violates both the First Amendment and the Fourteenth Amendment Equal Protection Clause. In 2015, an appeals court ordered the case to trial, ruling that while the wording of the law was not explicitly discriminatory, there remained “genuine issues of fact” about whether state officials were motivated by discriminatory intent when they enacted and enforced it.  On Monday, Tom Horne – formerly superintendent and later state attorney general – testified that his intent was to target all ethnic studies programs, not just the MAS program.

TUSD has a long history of racial segregation, as evinced by a 1978 federal court-issued decree to remedy the effects of segregation and a federal court order issued as recently as 2006, which found the District had failed to eliminate the “vestiges of de jure segregation.”  In response, a group of teachers created the MAS program in 1998 to close race-based achievement problems disproportionately affecting the district’s majority Latinx student population.  African-American and Asian-American studies programs were also established in compliance with the court orders.

The program featured books by predominantly Mexican and Mexican-American authors as well as other renowned Latinx authors of critical pedagogy like Paulo Freire.  The MAS program ran for two decades and increased graduation and college acceptance rates among MAS students to 90% and 80%, respectively, before it was discontinued.  The plaintiffs will point to these achievements to illustrate the law’s adverse impact on Latinx students.  The outpour of student support for the program also clearly demonstrates the success of the program to engage students.

Even though the state concedes that African-American studies and Asian-American studies programs would fit the definition of prohibited courses under the law, the MAS program was its only casualty.  Pedagogy of the Oppressed by Paulo Freire and other books taught under the MAS program were also removed from TUSD classrooms under the ethnic studies ban, yet no action was taken against the predominantly white Paulo Friere School, which employs the same pedagogical approach discussed in the book.

Ultimately, whether or not the anti-ethnic studies law remains in Arizona hinges on whether the judge is persuaded that state officials acted with discriminatory intent.  However, the success of ethnic studies programs is undisputed.  The growing popularity of critical race theory and ethnic studies programs across the country has shown that students with higher awareness of race and higher regard for their own ethnic identity are more likely to graduate high school and attend college.  The ban also ignited public support for the Arizona-based Librotraficante – a grassroots organization that traffics books banned under the law through underground libraries in Arizona, New Mexico and Texas.