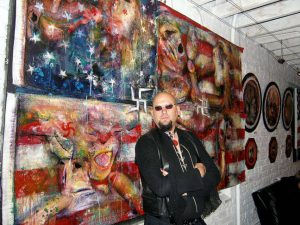 New York, NY, 8/24/2017- The National Coalition Against Censorship (NCAC) is urging Artspace, a non-profit organization that manages spaces around the country where artists live and work, to restore an exhibition of artworks to the lobby of its property in Everett, Washington, some of which feature the swastika. Artist Steven Leyba was ordered to remove his paintings despite the fact he was using the symbol to reclaim its original significance in Native American culture. NCAC argues that removing the work gravely compromises Artspace’s commitment to artistic freedom.

Leyba, a resident at the Artspace Everett Lofts in Washington, is of Native American and Jewish descent. The swastika symbol is commonly used in his work, as an act of healing and reclamation. In justifying the removal, the Artspace argued that the display of a symbol that has become associated with Nazism, even in an artwork, violates federal anti-discrimination law.

NCAC recognizes Artspace’s concerns but argues that removing Leyba’s work only silences a minority artist attempting to reclaim a symbol belonging to his own culture and counter the abuse of that symbol by the Nazis. The letter underlines that the removal undermines Artspace’s own mission in fostering an environment where artists’ creativity and free expression can flourish.

NCAC urges Artspace to issue a public apology to Leyba and to redisplay the artworks by no later than Monday 28th of August.

“By Artspace’s own admission, the swastika has a long and rich history outside of its reputation as a hate symbol,” said NCAC’s Arts Advocacy Associate Joy Garnett. “We therefore ask Artspace to affirm their commitment to artistic freedom and redisplay the artworks, extending the exhibit to reverse the harm caused by the censorship.”