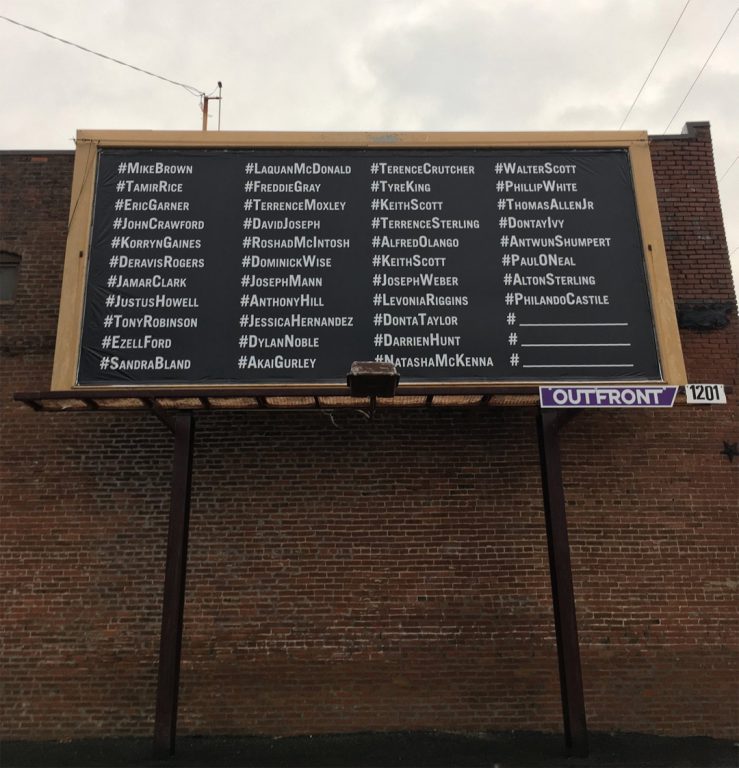 In August 2016, 50/50, an alternative Kansas City art venue that operates out of two shipping containers and leases a billboard for their rotating exhibition program, invited the artist Dread Scott to create a work for their ‘Black Lives Matter’ exhibition. Scott proposed a design for the billboard that included a list of names of those killed in recent police violence juxtaposed with a photograph of a flag he produced in 2015 that bears the words "A Man Was Lynched By Police Yesterday" (a reference to a  protest flag hung outside the New York headquarters of the NAACP in 1938).

But Outfront Media, the mega-corporation that owns and leases the billboard to 50/50, rejected Scott's proposal on the grounds that it violated their policy against “negative advertising” and their requirement that ads be "non-confrontational toward any group or individual to maintain relationships throughout the community.”

Successfully reversing the rejection required some negotiation and modification – but no compromise with the artist's vision. Scott devised a slightly modified design proposal, which successfully conveyed his initial message. NCAC also wrote a private letter to the corporation explaining the value of such a project to the Kansas City community. It pressed Outfront to consider the potential negative publicity they would incur from censoring such an important artwork from the public sphere. Finally, to facilitate the process, 50/50 brought in a local lawyer. As a result of our joint efforts, Outfront Media accepted the new proposal and the project went forward.

50/50’s approach serves as a model for all small alternative art organizations that face similar hurdles. Private corporations like Outfront control much of what can be seen in public spaces across the country. And while they have the legal right to set conditions on their rentals, artists and small alternative art venues such as 50/50 need to push back against their total control of public space. Failing to so runs the risk of our public sphere becoming nothing more than a giant space for commercial advertizing, at the expense of so many other vibrant and vital forms of communication and creative expression.