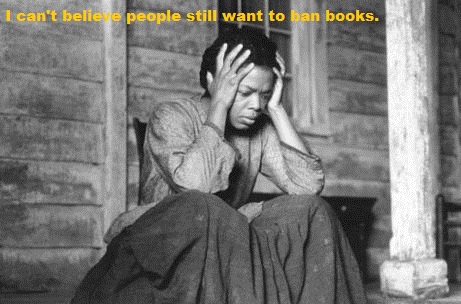 Earlier this month, the Washington Post reported on a mother’s attempt to have Toni Morrison’s Beloved banned from AP English classes in Fairfax County. When we heard about the challenge, we immediately contacted board members to take the temperature of the situation.

In Fairfax County — a huge public school system with beefed up district operations serving 180,000 studentss — there’s a two-tier consideration process when a complaint like Linda Murphy’s is filed. Fortunately, the school board voted 6-2 not to move forward in consideration of the complaint. Murphy claims she will take her concerns to the school board.

This latest Beloved challenge has inspired a number of comments by journalists and citizens.

The Post published a great letter by Jeetander Dulani that cuts right to the heart of the issue. Some books are difficult to read; the best books affect us deeply, sometimes in a very uncomfortable and unpleasant way. But, as Dulani writes:

“…my pain was nothing compared to what really happened more than a century ago, and the struggle I went through in opening myself up to those words and characters made all the difference.”

Couldn’t have said it better myself. Ms. Murphy’s son (who has by now graduated from the district) had nightmares after reading Beloved. The assumption behind this challenge is that no (young) person should ever have to have a nightmare if they can help it; that what is uncomfortable–even if the discomfort is in one’s imagination–is not valuable. I don’t think that is a good or even a very human assumption.

Those of us who have our existential needs met are much distanced from violent and desperate situations like those described in Beloved. I would be more concerned if my child learned about slavery, saw daily footage of bombings in the Middle East, came to know about poverty and didn’t have nightmares, didn’t feel anything.

In the Times Picayune, Jarvis DeBarry commented on this impulse to “protect” students from literature, using the example of expurgated versions of Tom Sawyer as well as Beloved. He writes:

…if children are only presented those things that are sanitized and unlikely to disturb them, what kind of education have they received?”

If you want to know the answer to that question, ask students themselves. By and large, the ones we’ve heard from enthusiastically express that they don’t want to be sheltered from these difficult realities.