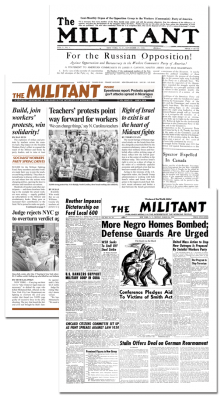 The Militant, a “socialist newsweekly published in the interests of working people” since 1928, has subscribers in state and federal prisons across the United States. Yet nearly two dozen issues of the paper have been impounded by Florida prisons over the last two years without explanation. This is four times as many attempts to block The Militant as occurred in all the other prisons in the country over the last 10 years. NCAC and a dozen other organizations are concerned by the escalating attempts to deny the First Amendment rights of both the publishers and incarcerated subscribers of the publication. On behalf of the coalition, NCAC has written to the Florida Department of Corrections to urge them to halt their frequent and unjustified attempts to disrupt distribution of The Militant.

Recently, the Florida Literature Review Committee overturned the ban on issue no. 34 of The Militant. Prison officials had cited as justification for the ban an article about opponents of solitary confinement in California and another about the hunger strike by Oleg Sentsov, a Crimean movie director who was imprisoned in Siberia by the Putin regime. They claimed the articles could encourage “riot” or “insurrection without explaining how. In fact, the ban was a simple abuse of power in order to censor inmates’ access to information.

Federal courts have repeatedly affirmed that prisoners have a First Amendment right to read, and publishers and others have a right to send them reading materials. While they have restricted those rights in the interest of security, it serves no penological purpose to block the free flow of ideas that makes it possible for prisoners to consider a wide variety of viewpoints in forming their opinions.

NCAC’s full letter can be read below. We urge Floridians to stand up for the rights of incarcerated readers to access information.