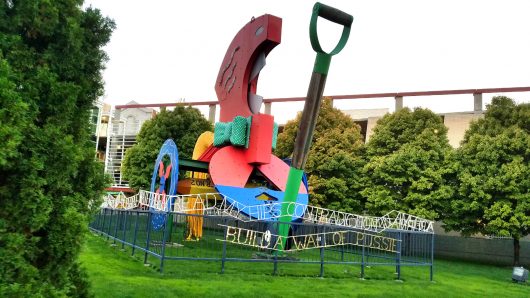 Billie Lawless, The Politician: A Toy. Image courtesy of artist.

The National Coalition Against Censorship (NCAC) urges Cleveland State University to remove the cover the University used to block from view a political text featured on a sculpture displayed on campus.

The sculpture, titled The Politician: A Toy, by artist Billie Lawless, is encircled by a fence featuring humorous one-foot-high texts that play with popular political slogans and media clichés. These include phrases like READ MY HIPS, CONTRADICTION IN AMERICA, and AFFIRMATIVE FRICTION.  Some phrases, like OBAMA SCARE have been added temporarily to reflect current issues and then removed.

In October, the artist added a new text, BUILD A WALL OF PUSSIE, referencing current political events. A few days later, the University wrapped the text in plastic and notified the artist that he must remove it the following day. 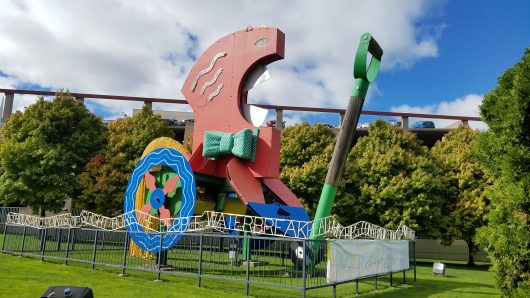 The University’s action is not only an affront to artistic freedom, it is also an example of viewpoint discrimination and therefore likely to be in violation of the First Amendment.

NCAC strongly urges Cleveland State University to remove the covering from the sculpture so that the work and its message can be viewed by the public as the artist intended. By doing so, CSU administrators will not only uphold academic freedom and comply with their First Amendment responsibilities, but will also demonstrate respect for the critical capacities of its student body and the larger Cleveland community.