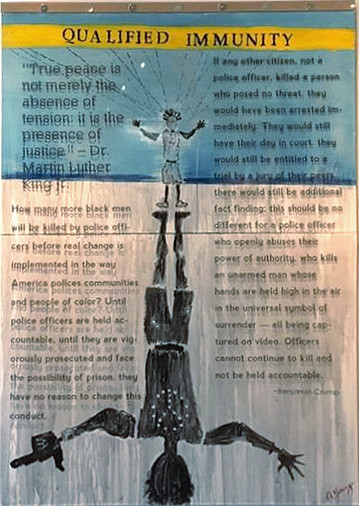 Earlier this year, the Burnsville Visual Arts Society (BVAS), a small non-profit and volunteer-run arts organization in Burnsville, Minnesota, issued an open call to its members to submit their work for their “Art Fete” exhibition (May 9-June 14) held at Burnsville’s deluxe municipal art and performance space, the Ames Center. But, despite winning a merit award in pre-show judging, a painting by Annie Young that takes on the difficult subject of police violence against people of color proved too controversial for display. Some BVAS board members demanded that Young remove it; she was given the option of hanging another work instead.

The painting, entitled cause of death: implicit bias, incorporates bits of text, including quotes from Dr. Martin Luther King, Jr., and civil rights attorney Benjamin Crump, who asks: “How many more black men will be killed by police officers before real change is implemented in the way America polices communities and people of color?”

Young, a painter with a hereditary condition that has rendered her blind, usually paints flowers. She works as an advocate and inspirational speaker, and is former member of the US Air Force. As the mother of bi-racial children, news of police violence against people of color has hit close to home, and she created her painting as a way to open a discussion about this ongoing issue. She has since described her intentions in her work and the experience of being censored on her website.

In a letter urging the board to restore the work to the exhibition, NCAC’s Arts Advocacy Associate Joy Garnett asserts that “claims of offense do not in and of themselves provide adequate justification for censoring artwork, and in this era of intense political polarization, many artworks may be offensive to someone’s viewpoint.”

NCAC’s full letter to Burnsville Visual Arts Society’s Board of Directors can be read below. Click here for a full screen view: