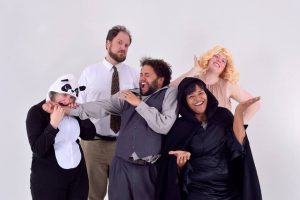 Cast of 'Caucasian-Aggressive Pandas and Other Mulatto Tales'

New York, NY, 5/8/2017- The National Coalition Against Censorship and the Dramatists Legal Defense Fund, two organizations committed to defending creative freedom, are calling on City officials of Burnsville, Minnesota, to make amends for refusing to allow the performance of a play with the word ‘mulatto’ in the title. The groups stress that the City cannot cancel a play based on a word in its title that some may consider distasteful or offensive.

For their 2017-18 season, the Chameleon Theatre Circle, a tenant in the city-owned Ames Center in Burnsville, MN, arranged to produce Caucasian-Aggressive Pandas and Other Mulatto Tales (‘Pandas’) by Derek (‘Duck’) Washington, an award winning sketch comedy based on Washington’s perspective on life as a biracial individual in America. When Chameleon sent its list of titles for the upcoming season to the Ames Center Director, Brian Luther, Luther demanded Chameleon remove the word ‘mulatto’ from Washington’s play or face cancellation, deeming the word “extremely offensive” and “derogatory”. When Washington refused to change his title, Luther took matters to the city council, who agreed with his stance. In response, Chameleon ended its relationship with the Ames Center.

The groups’ letter criticizes the city’s response, stressing that if all expression deemed likely to cause offense or pain was barred, “public discourse and debate would be radically impoverished.” This is precisely why the First Amendment protects artistic freedom. Indeed, by cancelling Pandas, the City deprives the Burnsville community of an opportunity to discuss and reflect on important and timely issues the play raises, such as race, identity and otherness in America.

The letter demands a public apology from the City of Burnsville and urges the City to develop a formal policy governing artistic programming at the Ames Center to ensure it is in compliance with First Amendment requirements. The groups offer to assist the City in formulating the policy.

“Although we were happy to hear the neighboring city of Bloomington has arranged to perform the play in response to Burnsville’s cancellation, it further proves the arbitrary nature of the initial decision,” said NCAC’s Arts Advocacy Program Associate Joy Garnett. “It also sends a harmful message that artistic freedom is not welcome in Burnsville, and so we urge the City to affirm its support for core First Amendment principles.”