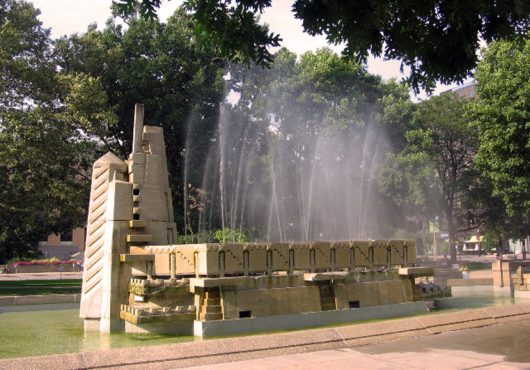 March 15, 2018– The National Coalition Against Censorship (NCAC), a nonprofit coalition of organizations devoted to promoting creative freedom, strongly opposes the City of Kalamazoo’s decision to dismantle and demolish Fountain of the Pioneers from Bronson Park. While in recent months, many cities have appointed special task forces to re-evaluate public visual representations of white supremacy, we must not confuse works of art with monuments that were historically intended to send a clear racist message. Fountain of the Pioneers is an art work that allows for multiple interpretations, while Confederate monuments, most of them erected in the Jim Crow era in the 1920s, explicitly celebrate the values of the Old South, among them the belief in white supremacy.

Early last Tuesday morning (March 6), the Kalamazoo City Commission voted 5-1 to remove Fountain of the Pioneers. The decision follows a flurry of recent protests by local activist groups, indigenous people, residents and historians. NCAC is concerned by the swiftness of this decision and cautions that such determinations should not be made in hasty emotional response to complaints. Broader and more careful consideration to all of the factors involved in the creation, installation and retention of a piece of public art should be made in situations such as this.

As NCAC’s Arts Advocacy Program coordinator, Joy Garnett, explains: “While removing the work will not change history, the fountain could provide much needed opportunities to bring that history to light – something that would counter racist attitudes rather than confirm them. Together with the online initiative that is currently under development, Fountain of the Pioneers opens a necessary conversation and creates awareness of forgotten or suppressed histories.”

The controversial monument depicts an Art Deco-style figure of a Native American face-to-face with the figure of a pioneer. While art historians have argued that the fountain symbolizes Native American resistance to westward expansion, some protestors say the fountain celebrates the violent removal of indigenous peoples from Kalamazoo. The fountain will be dismantled and put into storage in the spring or summer, but so far, local museums have indicated they do not have the space to store it, and it is not clear where the remains of the fountain will go. NCAC encourages the City of Kalamazoo to work to find a solution that does not require the demolition of this work of historical relevance.

Tuesday’s vote also affects the $2.8 million Bronson Park master plan for restoration of the fountain and Bronson Park. The plan was the result of a 12-year effort to respond to the community’s concerns. In a letter sent to the City Commission, 20 organizations and businesses formally showed their support for removing the fountain.

NCAC sent a letter to the Mayor and City Commission prior to the March 6 vote. Read the letter below; click here for a full screen view: