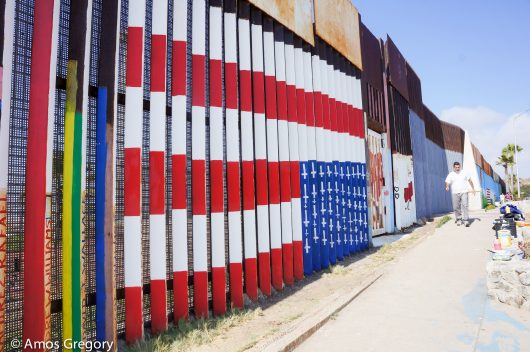 The mural painted on a Tijuana border wall by a group of deported veterans // Image courtesy of Amos Gregory.

The National Coalition Against Censorship (NCAC) is urging United States Customs and Border Protection (USCBP) to respect the artistic expression of deported US military veterans and of a recognized public artist. USCBP is considering removing a protest mural on the border wall dividing San Diego and Tijuana, following a visit to the area by President Trump.

NCAC has written to the San Diego Sector of USCBP to caution the agency against silencing veterans’ voices and censoring public art based solely on the work’s political message.

The mural was designed by Amos Gregory, a San Francisco-based muralist, community activist and disabled Navy veteran who works with other veterans to tell their own stories through painting. In 2013, Gregory worked with a group of deported veterans to paint the mural on the south side of the border wall at a spot known as “Friendship Circle”. It depicts an inverted US flag, a military distress signal, symbolizing the struggle of deported veterans to return to the US. Using the slats in the fence, the veterans also painted their names throughout the mural. 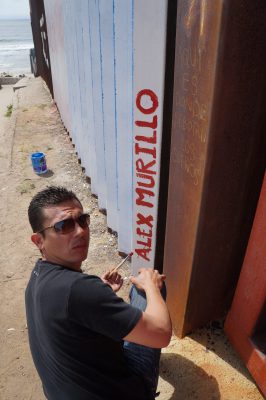 Alex Murillo, a deported veteran, painting his name on the fence.

In April of 2018, just one month after the President’s visit to see wall prototypes near the California-Mexico border, complaints prompted the USCBP to open a review of the 5-year-old mural.

Joy Garnett of NCAC’s Arts Advocacy Program said, “This move is clearly politically-motivated and based on discomfort with the artwork’s message. All of the artists involved have served in the US military and chose to express themselves through this legitimate form of peaceful protest. To paint over this mural would effectively cover up a cogent reminder of deported veterans’ plight, removing an opportunity for public debate around this important issue.”

San Diego is separated from Tijuana by a pair of parallel fences. Friendship Circle, located in the space between the structures, is supervised and periodically opened by USCBP so family members from both sides of the border can meet and talk through the metal mesh.  The mural in question is painted on the southern wall, facing Tijuana. 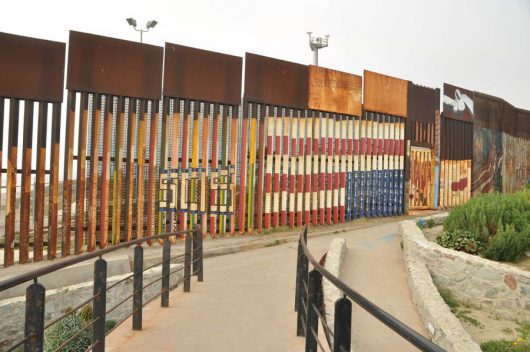 The inverted flag mural on a border wall at “Friendship Circle”

Gregory has created murals with different communities and for various causes all over the world. He believes that the deported veterans mural is being intentionally targeted by USCBP because of its political message. 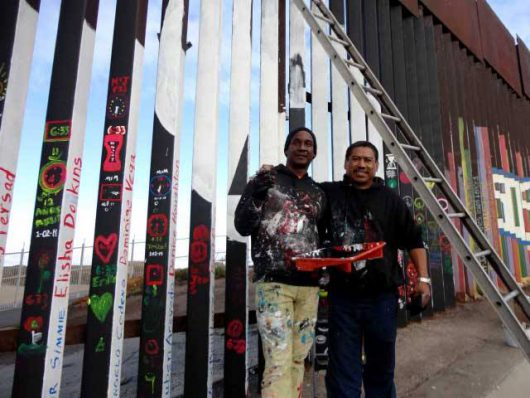