About the Artwork – James Parlin (censored at BGSU)

Previous Next
About the Artwork – James Parlin (censored at BGSU)

James Parlin’s sculpture "The Middle School Science Teacher Makes a Decision He’ll Live to Regret" provoked controversy and censorship when it was included in an exhibition of the artists’ work at Bowling Green State University Firelands. Some even claimed the image was illegal child porn and condemned NCAC for opposing the censorship. The claim is unfounded: child pornography is legally defined and by definition requires images of actual children. Parlin’s sculpture uses only metal, paint and ideas. Surely, the depiction of an illegal act is not an illegal act in itself or we wouldn¹t have endless scenes of murder, rape, and violence gracing the walls of art museums or crowding movie and television screens.

For something to qualify as obscene under Supreme Court law, it is not enough that the material to offend community standards of decency; it also must lack "serious literary, artistic, political, or scientific value." Parlin’s work has serious artistic value, which is enough to exempt it from any charge of obscenity.

Legal issues aside, how are we to look at this sculpture, which represents one of the central taboos of our time? Why does an artist need to bring before our eyes this despicable act?

Anyone that has ever visited a museum knows that the subject matter of art is not always the noble and the beautiful. One of the traditional functions of art has been to teach moral behavior by representing, often in grotesque or satirical ways, what is morally reprehensible. By the fourth century BC, there already existed moral narratives in works such as the Greek painter Apelles’ Allegory on Calumny.

Medieval artists portrayed sin and its consequences with relish. The early Christian Church used art to teach moral lessons: vices were portrayed as object lessons on the perils of leading a less than virtuous existence. There were combats between Chastity and Lust, Humility and Pride, Patience and Wrath. In prints from the late Middle Ages and early Renaissance, one can see humanity abandoning itself to the sins of the flesh: all depicted as a mirror of human folly and depravity. 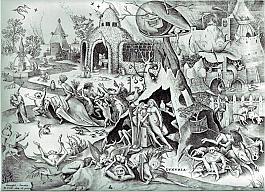 Parlin’s work is part of this tradition. Those offended by the work’s subject matter have failed to note, most likely because most of them haven¹t even seen the sculpture, that it shares their sense of disgust with the child abuser. As the artist has stated, "Sometimes people do big things wrong, with big consequences. Sexual assault is one. This piece is based on someone who lost a job, family and freedom. He made a decision that led to disaster."

Today, art still has the means of making tangible human folly and depravity, in this case child abuse. We should focus our energies on those who mistreat children, not on suppressing the work of an artist who has chosen to show the sad and brutal reality of an act that is, no matter how much we may deplore it, a part of contemporary reality.

Here is an excerpt from a statement by the artist, James Parlin, regarding the controversy:

"Some of the work in the exhibition was thematically challenging. Three of the pieces were portraits of friends who had committed suicide. Two of the pieces depicted people with severe eating disorders.

The piece of sculpture that was removed from the exhibition is based on the story of a man who today is in prison for the things he did. It shows a crime being committed. It is not a graphic piece, and it condemns the crime.
It shows a man who, in the very act of committing the crime, is staring ahead at a future of disgrace and ruin.

Crime should be punished. Artwork about crime and its consequences, however, is entirely suitable for adults to look at and consider. Art helps us to think about right and wrong, compulsion and restraint, and actions and consequences."