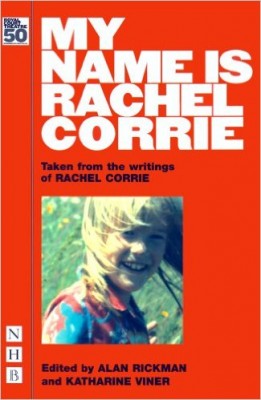 The New York Theater Workshop recently postponed the production of "My Name is Rachel Corrie." The play is a selection from the writings of Rachel Corrie (the 23-year-old American who went to aid Palestinians in the Gaza Strip and, in March 2003, was killed by an Israeli bulldozer) edited by Alan Rickman and Katherine Viner.

The theater's artistic director, James Nicola, cited the "possibility that a number of factions, on all sides of a political conflict, would use the play as a platform to promote their own agendas"; and that the theater needed more time "to contextualize the work so Rachel Corrie's powerful voice could best be heard above the din of others shouting for their own purposes."

It is hard to understand what more the theater could do to help Rachel Corrie's voice be heard than produce the play, which, literally, is Rachel Corrie's voice. It seems more likely that the play has been postponed not out of concern for Rachel Corrie's voice, but because of fears as to how the play would be received by those who already have a strong opinion on the subject and will not even bother go to see the play before attacking it. Such concern would not be unfounded: Art and theater that comes from a Palestinian perspective or is felt to be sympathetic to Palestinians has increasingly come under attack in the last couple of years.

Rachel Corrie and her death are already objects of controversy, used as a platform to advance political agendas. As Katherine Viner, one of the play's creators, wrote in the Guardian: "She became a martyr to the Palestinians, a victim of their intifada who had stood up to the mighty Israeli army; Edward Said praised her actions as "heroic and dignified at the same time." But many Israelis considered her at best naive, interfering in a situation she didn't understand. And to some Americans she was a traitor; websites blared that "she should burn in hell for an eternity"; "Good riddance to bad rubbish"; "I'm thankful she died."

The potential for the play to generate controversy is not likely to subside while the Israeli-Palestinian conflict goes on. Does that mean that any artistic production that deals with an individual's perspective on the lived experience of that conflict–biased as it might be–should be postponed until there is peace in the Middle East? Current events frequently divide us and, in our anger, we are frequently blinded to the humanity of the other side. Good art remedies that blindness.

New York Theater Workshop's suppression of the production to avoid potential controversy is the essence of self- censorship. It is also a betrayal of the theater's mission to "explore perspectives on our collective history and responses to the events and institutions that shape our lives."

Resources:
–"Too Hot for New York," by Philip Weiss for The Nation
–NYTW's Statement Calls Concerns over Postponement a "Screed About Censorship"
–"Tensions Increase Over Delay of Play" by Jesse McKinley, in The New York Times
–"Play About Demonstrator's Death is Delayed" by Jesse McKinley, in The New York Times
–"Let Me Fight My Monsters" from The Guardian
–A four-star review of the production from the Royal Court Theater in London, from The Guardian
–Responses to the play and the controversy, from Rachel's parents
–The Battle Over My Name Is Rachel Corrie, by Connie Julian