Sculpture Restored After Uproar in Michigan

Previous Next
Sculpture Restored After Uproar in Michigan

The annual “Art ‘Round Town” (A.R.T.) exhibition brings 42 outdoor sculptures to public areas throughout downtown Saugatuck, Michigan. This year’s favorite among the panel of A.R.T. judges is a resin and bronze sculpture by South Haven, MI artist, Patrick McKearnan. The sculpture depicts a nude toddler writing "Who is responsible here?" on a wall. Having received the most votes from the exhibit’s panel, it was chosen to reside at City Hall. 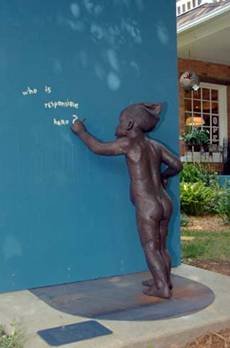 Saugatuck leaders raised objections that the sculpture was a tongue-in-cheek jab at the City Council. In a 4-3 vote on Tues., May 30, city officials gave A.R.T. organizers two weeks to relocate it. Mayor Pro-Tem Jeff Spangler, who voted for the move, claimed that the decision wasn’t a matter of censorship:"We felt that the sculpture was inappropriate for the location they chose," Spangler said. "I don’t think that a nude child in front of the city offices is appropriate."

But Mayor Tony Vettori worried that the council’s vote would be interpreted as censorship. "Sculpture throughout the ages has been a form of expression and free speech," Vettori told local reporters. And, based on the public dispute and debate that has ensued, that is apparently how Saugatuck residents interpreted the decision.

Overwhelmed by criticism, the council voted 7-0 in a special meeting yesterday to rescind the earlier measure. “I learned a very good lesson about art," said Mayor pro-tem Jeff Spangler, an early critic of the sculpture. "What’s good art for one person may be bad art for another person. Let art be art."

Despite this resounding success, it seems the fate of the sculpture remains in question: having printed 15,000 brochures that reflected the planned move, organizers may move the sculpture after all to conform with the printed exhibition guide, lest they be forced to reprint …

Mayor Vettori has suggested a simple sign to instruct those who follow their brochures to the "new" location that the sculpture had remained at City Hall. This approach would respect the A.R.T. Committee’s original decision, and it would save paper too. Perhaps the sign should read, "Thanks to some responsible people in City Hall, the sculpture you’re looking for has not been relocated."