(UPDATE: The Boston Museum of Fine Arts responded to the NCAC letter. Read it about it here). 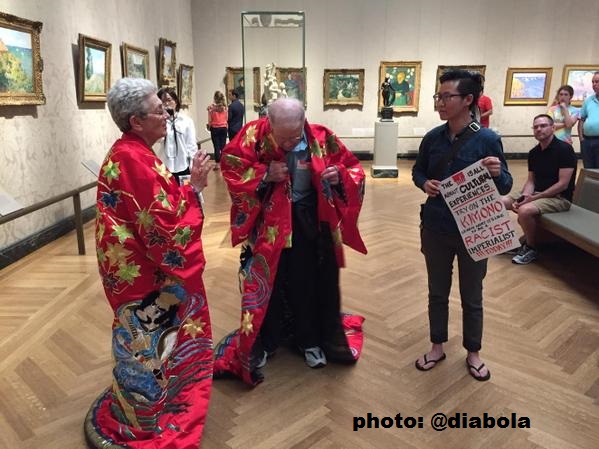 Was an interactive exhibit an act of racist cultural appropriation?

That is the question posed by a controversy over "Kimono Wednesdays" at the Boston Museum of Fine Arts, an event intended to accompany the display of Claude Monet's 1876 portrait "La Japonaise." But the museum abruptly altered the show in response to the protests.  In a July 17 letter to museum director Malcolm Rogers, the National Coalition Against Censorship (NCAC) criticized the decision as the wrong way to handle controversy, which should have been an opportunity for conversation and dialogue.

As part of a recent touring exhibit in Japan, the museum commissioned a replica of the kimono worn in the painting by Monet's wife. Visitors could feel and wear the garment if they chose to do so. That element offended a small but energetic group of protesters in Boston, who declared this presentation was a form of racist "yellow face…that would compel members of the public to participate in Orientalism."

At first the museum appeared committed to its original presentation; but on July 7 it released a statement admitting fault ("We apologize for offending any visitors") and decided that the kimonos could no longer be worn; visitors would be permitted only to touch them.This compromise was still unacceptable to the protesters, who maintained this was still "inappropriate without proper mediation and acknowledgement of the Orientalism of cultural appropriation of dress."

In its letter, NCAC argues that any museum "should use controversy as an opportunity: to listen and respond to critical voices, to discuss the history of cultural appropriation with its public, and to create a deeper awareness of the historico-political context in which art is created and seen." The letter points to NCAC's "Museum Best Practices for Managing Controversy" — developed in conjunction with Association of Art Museum Curators, the American Alliance of Museums and other national organizations– for guidance. The guide recommends leaving controversial exhibits unchanged and advises that museums provide opportunities for "additional programming to provide a platform for diverse opinions."

NCAC commends the Boston MFA for doing the latter, but argues that the institution can go further, to seize this "opportunity to engage in a broader discussion about not just this particular exhibit, but also the larger issues of Orientalism and appropriation." Such actions would serve to promote intellectual freedom and protect artistic expression.

Read the letter below; click here for full screen view