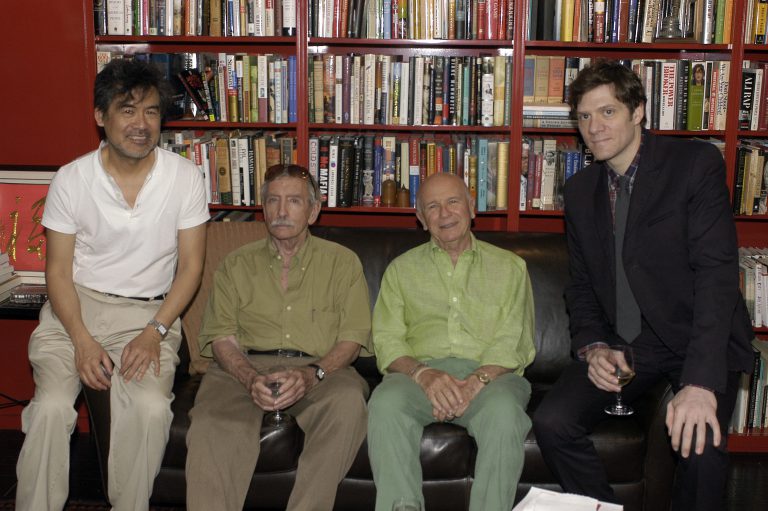 The Free Speech Leadership Council gathered on June 23, 2010 for “Playwrights on Censorship: A Conversation with Edward Albee, David Henry Hwang, Terrence McNally, and Adam Rapp.” It was perhaps the first time ever these luminous playwrights conversed in the same room!  Time Out New York’s Theater Editor David Cote moderated the discussion and Jane Friedman, Chair of the Council, hosted the event in her Manhattan home.

The playwrights agreed that the censorship of their work can be both overt and insidious.  Edward Albee’s Who’s Afraid of Virginia Wolf and David Henry Hwang’s M. Butterfly have been challenged and criticized for their take on the “taboo,” be it sexuality, religion, or race. Terrence McNally’s play Corpus Christi remains his most censored work, as it was condemned by the Catholic League we it first premiered and a recent performance was canceled this year at Tarleton State University near Fort Worth, Texas. “I still have a fatwa on my life,” McNally remarked during the discussion.

Adam Rapp was so affected by censorship that he wrote The Metal Children, which premiered off-Broadway this Spring.  The play was inspired by the removal of Rapp’s book, The Buffalo Tree, from a high school curriculum in Pennsylvania. Numerous high school students and directors have faced censorship from parents and administrators for attempting to produce works like The Laramie Project, Picasso at the Lapin Agile, and My Name is Rachel Corrie.  NCAC even honored students from Connecticut’s Wilton High School at its Annual Benefit Celebration in 2007, when the students bravely protested the cancellation of their production “Voices in Conflict.”  When detailing his own account with The Buffalo Tree Rapp said, “I actually believe that it’s condescending to deprive kids of tough stories, especially if they’re artfully told.”
The playwrights also wrestled —and disagreed—with the notion that commercialization obstructs free speech in that it causes many playwrights to self-censor in the hopes to appeal to mainstream markets.  “Do you want to shock audiences with your work? Is outrage a success?” asked Cote. Albee responded, “All art is an act of aggression against the status quo.”

“Playwrights on Censorship” followed last year’s inaugural event, “A Conversation with Toni Morrison,” in a series of salon-style gatherings for NCAC’s Free Speech Leadership Council. The Free Speech Leadership Council is a group of intellectual, cultural, legal, and business leaders committed to the defense of free expression.  For more information, or to join the council, please visit this page or contact Larry Horne at 212-807-6222, ext.17 or [email protected]

For more reports on the conversation, check out Forbes.com’s Booked blog.