An Art Career Intertwined with Censorship: The Murals of Mike Alewitz

Previous Next
An Art Career Intertwined with Censorship: The Murals of Mike Alewitz 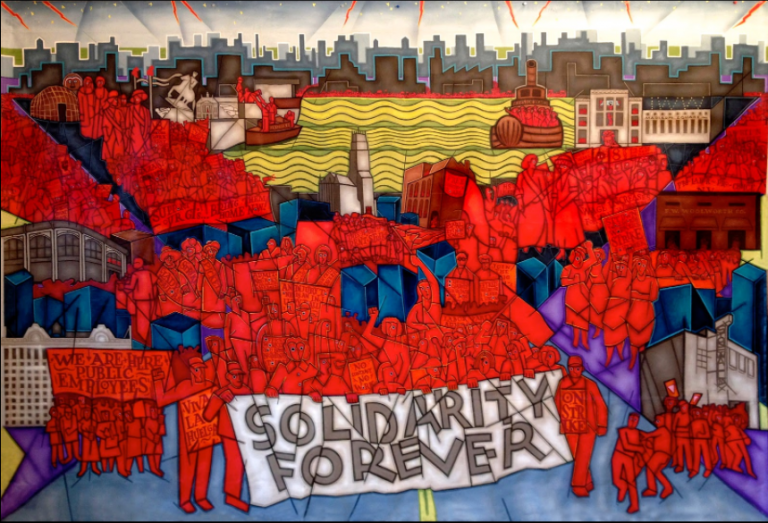 A profile in The College Voice, the student newspaper of Connecticut College, of an activist-turned-artist named Mike Alewitz details his radical, politically charged career that is characterized as much by the provocative works he produced as by the incidents of censorship the works inspired.

Alewitz, a former professor at Central CT State University , who earned his MFA from the Massachusetts College of Art in 1983, is best known for his murals depicting the American labor movement. According to the profile author, his "stories are a routine of acceptance and decline, of struggle and movement. His pieces are vibrant, loud, colorful.  They declare to be acknowledged."

In the profile, Alewitz, now in his 60s, tells the story of his life's work through a tour of his Connecticut home, identified "by its fiery red exterior and vibrant pink detail," where he sits at his dining table accompanied by a make-up smeared mannequin and a "large, plastic bunny with long white ears."

His story begins as an undergraduate at Kent State University, where his witnessing of the Kent State massacre furthered his motivation as an anti-war organizer. At the time of the massacre he was the university's Chairman of the Student Mobilization Committee Against the War (SMC). After the shooting,

he left to become an organizer for anti-war movements, traveling to Austin, Los Angeles, Cleveland, New Orleans, Virginia, Boston, New Jersey.  At the time he began working for the union movement, he was in industry as a railroad worker and machinist.  He even laid some of the railroad tracks in New London, Connecticut that remain about half a mile from his house. While working, Alewitz picked up sign painting and billboard painting before going to the Massachusetts School of Art in his late thirties.  He considers this the beginning of his art career.  “I had the background,” he tells me. “I could render.”

As an MFA student, Alewitz had his first encounter with the censorship of his work. A column he painted in tribute to a local back man killed by the police was subsequently graffitied by the police and then painted over by the authorities. Since then, the profile explains, "Alewitz has been devoted to agitprop work, a combination of agitation and propaganda, which he also refers to as 'high grade street art'."

Alewitz garnered a reputation for works that paid tribute to labor groups, such as the International Confederation of Energy and Mine Workers and UNITE – The Union of Needletrades, Industrial, and Textile Employees, murals that reflected his political perspective; his sense of antipathy toward the capitalist system. The author notes that an adjacent room in his house is lined with books Karl Marx, Frederick Engels, and Lenin.

“Yeah,” he tells the profile writer, “I’m the real deal.”

According to the profile, Alewitz keeps boxes of press articles about incidents of censorship his works have produced. In 1999, for example, he was funded to produce a series of murals called “Dreams of Harriet Tubman.” The central mural he painted "shows Harriet Tubman holding a gun and on either side of her are red swirling waves.  Silhouettes of people cluster and crowd at her feet." The mural was never made public, however:

“You’re in a place where there are statues with white men with guns everywhere and they can’t…” his voice trails off as he tells me the story.  “I painted the only image of a woman…a Black woman…with a gun.”  After the mural was rejected, Alewitz issued an offer for a free mural but no one would provide a wall.  “Everybody’s afraid,” he says. “It was censorship and not the kind that helps your career.”

Alewitz’s history with censorship is well known to NCAC. In 2014, for example, the Museum of the City of New York refused to display his mural at the inaugural exhibition of the museum’s Puffin Gallery for Social Activism. Despite the overtly left-leaning politics of the Puffin Foundation, which commissioned the mural for their eponymous gallery, the museum was reluctant to be associated with the mural’s unvarnished, left-wing, pro-labor views. NCAC urged the museum and the foundation to open a dialogue about how this mural, which depicts the struggles of radical labor and civil rights movements in our society, can be presented to the public.

Read the rest of the interview with The College Voice, which takes the reader through Alewitz’s house and studio, floor by floor, mural by mural, story by story. As the profile writer comments:

‘There is a book in every one of these stories,’ he says. […] There are novels behind his paintings and behind those novels are history books. His house is a time capsule.