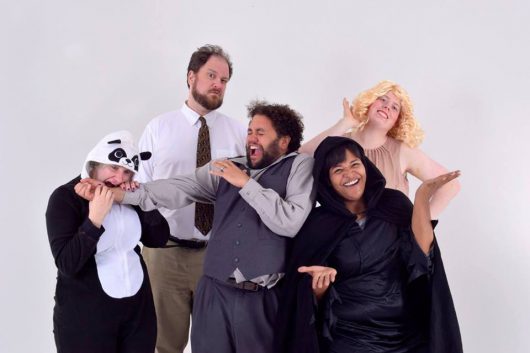 Cast of 'Caucasian-Aggressive Pandas and Other Mulatto Tales'

UPDATE 5/4/2017: NCAC and the Dramatists Legal Defense Fund (DLDF) has sent a letter to Mayor Kautz demanding a public apology from the City of Burnsville for restricting the creative freedom of Duck Washington and the Chameleon Theatre Circle. The letter also strongly urges the City to develop a formal policy governing artistic programming at the Ames Center to ensure that it is in compliance with First Amendment requirements. Read the full letter below.

The Ames Center, a city-owned performing arts center in Burnsville, Minnesota, has refused to allow the Chameleon Theatre Circle, their resident theatre company, to stage a play with the word “mulatto” in its title.

The play, Caucasian-Aggressive Pandas and Other Mulatto Tales, is written, directed and performed by biracial playwright Derek 'Duck' Washington. It was a hit at the 2016 Minnesota Fringe Festival and received numerous accolades. Through wit and humor, Washington offers a much-needed conversation about race and otherness, offering a perspective on the experience of growing up biracial — or "mulatto," a dated term used to describe a person with one black and one white parent.

While the Ames Center claims their decision to disallow the play had nothing to do with censorship, that is precisely what it is.

Washington sent an open letter to Executive Director of the Ames Center, Brian Luther, as well as to the Mayor, the City Manager and the city council, stating:

[…] I was really excited by the proposal to bring the show to Burnsville as I had so many people come up to me after performances or throughout the Fringe Festival telling me they wished I could bring the show out of the city to their home towns in the suburbs. They felt it would be very valuable to their communities and that this tale of race would have a positive impact on their residents regardless of their demographic background. This made Burnsville an optimal place to launch the show after two successful runs in Minneapolis…

I'm told that members of the city took concern with the word "mulatto" being in the play's title. Mulatto is a word that represents someone that is the offspring of a white parent and a black parent. It is deemed by many to be a derogatory word, as its origins stem from a Spanish or Portuguese work for mule, which is the cross between a horse and a donkey. The show does not ignore the word's derogatory origins and in fact addresses them in the first few minutes of the show. In a large way discussing those origins is a lot of what the show is about. As a person who is both black and white it is a word I still hear even if it isn't quite as present in the modern vernacular. I put a lot of thought behind this word when writing this show. Could I have changed it "Mixed Race Tales"? Possibly, but it is a show specifically about my experiences of being both black and white. I felt like saying "Mixed Race Tales' included a much larger subset of people whose experiences may or may not have represented my own….

So when I was asked by the city if I would change the title, I said no. Not only did it not make sense for the show, it also meant it would be difficult to leverage the show's previous success operating under that title.[…]


Chameleon posted a public statement in support of Duck Washington on their website.

In his detailed analysis at the New School's Arts Integrity Initiative, Howard Sherman points out:

Certainly Chameleon has stood up for their rights to produce work they feel is worthy, and will now struggle through the process of finding a new home for their work to insure its creative integrity in the future. But in the meantime, Duck Washington’s opportunity to reach new audiences with Caucasian-Aggressive Pandas and Other Mulatto Tales is on hold, as a result of the Ames Center’s effort to avoid giving offense to anyone. In doing so, they censored the work; they wouldn’t permit it on their small stage or on their signage, because avoidance was simpler than engaging with the work and supporting the artist and his collaborators.

Months of negotiations between Chameleon and the Ames Center to establish their program for the 2017-18 season has resulted in an impasse; Chameleon have decided to end their relationship with Ames and find a new space. Future productions of Caucasian-Agressive Pandas now remain up in the air. And while the Ames Center claims their decision to disallow the play had nothing to do with censorship, that is precisely what it is. The very definition of censorship is the suppression of a word and an idea because some might find it offensive.

NCAC is looking into the situation to clarify facts regarding the basis of this act of censorship and will update this post as the situation develops.