The staff at The Visceglia Gallery were very much looking forward to the opening of its GET IT ON THE RECORD exhibit, a collection of works by twenty-one African-American artists investigating the “collective history of Black America.” As part of the exhibit, poet Amiri Baraka had been invited to speak. That invitation was rescinded, however, because the College President and others deemed his work to be too controversial. Baraka’s works are sometimes polemical and have been often criticized for their hostility toward women and Jews. 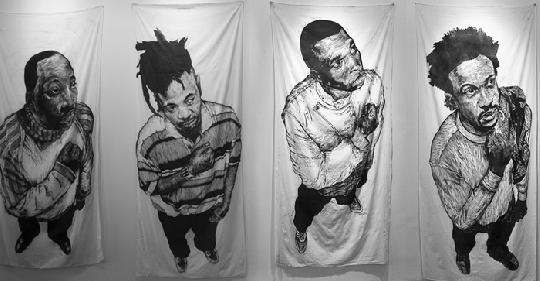 Yashua Klos’ “Banners” are part of the Visceglia Gallery Show

Dismayed by the news of the cancellation, the artists participating in the show expressed their disapproval of the College’s decision in an open letter that was circulated at the exhibit’s opening. The letter is below.

We, the undersigned participants in the exhibition GET IT ON THE RECORD at Visceglia Art gallery, Caldwell College, NJ, strongly oppose the decision to cancel Amiri Baraka’s scheduled appearance at a September 20th event associated with the show.

It is our understanding that Baraka’s appearance was cancelled because of the controversial character of the ideas expressed in his work. We consider the cancellation and its motivation a fundamental violation of principles of academic freedom, which dictate that any educational institution should remain open to a wide diversity of views, many of which it does not necessarily endorse.

Amiri Baraka is a widely recognized poet, playwright, and cultural critic, who has played an important role in recent Black history. One may disagree with his ideas, but for an educational institution to silence those ideas sends a chilling message to anyone whose art takes a strong political position. Limiting the campus conversation about race in the United States to ideas that are, in the arbitrary judgment of college officials, non-controversial, is the worst kind of political censorship.

Within the walls of an educational institution in a democratic society no ideas should be censored outright. Ideas can be debated, critiqued and discredited in reasonable conversation, but not banned. Caldwell College’s stated mission is “to be recognized as a leader in providing transformative education addressing society’s educational, economic, and cultural challenges.” This mission is not likely to be accomplished if the college closes its doors to artists and intellectuals who question our economic, cultural and political system.

As participants in the show, we urge the College to demonstrate its respect of the maturity of the student body and principles of academic freedom by reconsidering the cancellation of Amiri Baraka’s appearance.

* withdrawn from the show in protest of the censorship