This week’s banned book is the 2004 novel ttyl (talk to you later) by Lauren Myracle. This is the first novel ever written as instant messenger style conversations between three fictional characters. ttyl was New York Times, Publishers Weekly, and Book Sense bestseller, and has had two sequels, ttfn and l8r, g8r. 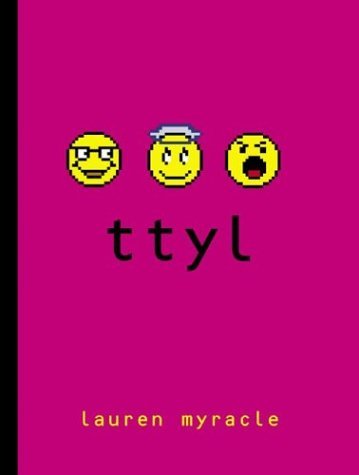 The book follows the friendship of three fifteen year old girls as they face the teenage drama of their sophmore year in high school. The girls face  and discuss, via instant messenger, manipulative classmates, cheating boyfriends, and flirty teachers.

The story chronicles, in “instant message” format, the day-to-day experiences, feelings, and plans of three friends, Zoe, Maddie, and Angela, as they begin tenth grade.

The book offers a awfully candid conversations and between best friends and explicit content that some school libraries deemed inappropriate. One concerned parent in Texas was cited in a report from KXAN-TV: “A few pages into it and it was clear, off the charts vulgar.”