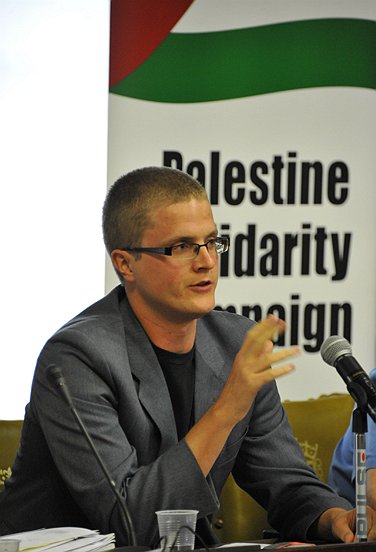 Ben White speaks to members of the British Parliament in 2011

Author and activist Ben White will speak at Brooklyn College today at an event entitled “Israel: Aparteid not Democracy,” organized by Students for Justice in Palestine. Nearly two dozen other campus and other groups are supporting the lecture, including — notably — the English, Political Science and Sociology departments. The talk is being organized as part of Right to Education week, a campaign which seeks to raise awareness of “issues facing Palestinian students, teachers and academic institutions” in Israel.

Unsurprisingly, White, the talk and its subject matter have provoked a now-familiar group of New York lawmakers who are criticizing the college for allowing the event. Among them, state Assemblyman Steven Cymbrowitz has written a letter to CUNY stating that “Publicly funded institutions do not have the right to spew hatred without permitting an equal response.” Pro-Israel attorney Alan Dershowitz has also called for a rebutting speaker and readily and oh-so-generously offered his own services.

We expressed our support for Brooklyn College today in a letter to college president, Professor Karen Gould (read here). The brouhaha surrounding White’s talk follows hard on the heels of calls to censor a Boycott, Divestment and Sanctions panel this past February at Brooklyn College. And these instances are just two of many we have seen where certain points of view are censured or silenced when it comes to politics in the Middle East. Indeed, few issues are more contentious than the Israeli-Palestinian conflict.

As we have argued before, levying an ultimatum of “balance” as a condition for speech is increasingly used to control public debate and undermine academic freedom. Requiring pre-conditions about how, who and what when it comes to the expression of ideas is often a veiled attempt to control the conversation and silence opposition.

Cymbrowitz and allies have a right to speak their views; as prominent and visible politicians, writers and lawyers, they are given frequent and ample opportunity to enjoy that right. But as we note in our letter, “we are unaware of any situation where Professor Dershowitz, who is as openly pro-Israel as he is a proponent of so-called balance, has called for a pro-Palestinian rights speaker to provide ‘balance’ at his public appearances.”

We applaud the administration of Brooklyn College and its English, Sociology and Political Science departments for upholding the principle of academic freedom, as well as respecting the rights of faculty, students, and invited guests to express and hear different perspectives on world events. In the words of Mayor Michael Bloomberg: “If you want to go to a university where the government decides what kind of subjects are fit for discussion, [then] I suggest you apply to a school in North Korea.”