Previous Next
Canceling Cruz Was Wrong 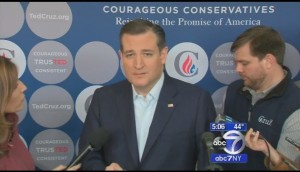 The decision to cancel Republican presidential candidate Ted Cruz’s appearance at a Bronx high school raises troubling questions about the school’s understanding of, and commitment to, free speech principles.

In a letter to their principal, a group of students at Bronx Lighthouse College Prep Academy threatened to stage a walk out in protest of Cruz, whose views they claimed are offensive as well as “misogynistic, homophobic, and racist." While the students' letter did not explicitly ask the school to rescind the invitation, school officials canceled the event, stating that the students' concerns had persuaded them to do so.

We salute the students for their passionate engagement in current affairs and for exercising their right to express their objections to Senator Cruz’s positions. But by canceling the event, school officials turned the students' protest into something they apparently had not sought: a “heckler’s veto,” which happens when protests result in silencing the ability of others to speak and be heard. The heckler’s veto is problematic because it gives control over public discourse to those who object to a speaker’s ideas, depriving speakers of their right to express views and others of their right to hear them.

By pulling the plug on the Cruz visit, the school did not just lose a teachable moment; it taught the wrong lesson.

While it is unclear exactly what type of event had been planned, the school’s response deprived students of the opportunity to hear Cruz speak and to challenge him directly. The school also lost the opportunity for a potentially meaningful discussion of politics, elections and government—not to mention the power of dissent and protest.

The appearance could and should have been allowed to proceed. It could have been used to educate students not only about the issues raised in the current presidential campaign, but about the critical First Amendment principles that allow people to express ideas of all kinds, to discuss and debate controversial views, and to protest ideas with which they disagree. It could have enhanced that lesson if the school had also used the occasion to teach students about the history of peaceful protests in promoting social change.

By pulling the plug on the Cruz visit, the school did not just lose a teachable moment; it taught the wrong lesson.