Kimonos and Controversy: What the Boston MFA Got Wrong

Previous Next
Kimonos and Controversy: What the Boston MFA Got Wrong

“Kimono Wednesdays” was an interactive event held by Boston’s Museum of Fine Art (which houses the largest collection of Japanese Art in the western world), in which audience members were invited to wear a replica of the Uchikake (overcoat) worn by Camille Doncieux in Claude Monet’s iconic painting “La Japonaise.” The event toured Japan, but once imported stateside it sparked outrage. 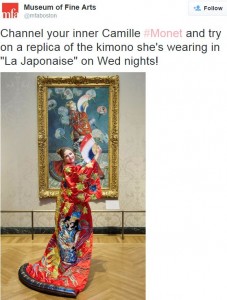 From the perspective of the museum administrators, "Kimono Wednesdays" must have seemed airtight: Give the audience something interactive and visually attractive, and then watch the Instagram and social media ‘likes’ explode. The exhibit was a hit in Japan, so the “authentic” Japanese perspective was vetted. So it was probably a surprise when social media attacks hit the museum, claiming “Kimono Wednesdays” was an Orientalist representation of culture. MFA was criticized for its presumably uncritical support of “archaic values and belief systems that promote racism by way of cultural appropriation and cultural insensitivity.”

The MFA’s response to the protesters underscored their naivete. After standing firm for several days, they apologized and modified the exhibit. The kimonos remained on display in the Impressionist gallery every Wednesday evening in July for visitors to touch and engage with, but not to wear.

The administrative maneuver of modifying an exhibit is a compromise that has opened up a bizarro-third-exhibit — one where the institutional voice is not admitting to the charges of racism, but has apologized “for offending any visitors,” which can be interpreted as an admission of guilt. Now we have not one, but all parties dissatisfied: a museum constituency that wants to wear the kimono, protesters asking for further structural changes (including staffing), and the museum with a compromised vision. The MFA director Malcolm Rodgers, who is soon retiring, said recently, "A little controversy never did any harm.” This may be true, but in this case my estimation is that their institutional response did great harm to the MFA. They should have executed Kimono Wednesdays as they initially planned until public opinion was fully considered.

Whatever MFA's intentions may have been, by altering the exhibit the museum provided an answer — when what they should have done was to foster more questions. And the best way to do that would have been not to change their exhibit but by keeping it intact, and demonstrate through public outreach that the relevant museum administrators have an open mind. A museum is not a monolith, it is run by people and it can run into unintentional consequences. These unintentional paths are where we can find the museum’s social value and the great moment it realizes a new community. I imagine a museum that can come forward and seize their mission instead of risk-managing itself into an unsatisfying exhibit.

Back in April, the incoming director Matthew Teitelbaum said he was taking the job because it would be “[an] opportunity to work with an institutional collection of world cultures — to be thinking about how a collection can animate a community,” I'm excited to see if he will thoroughly consider his newly animated community however unintentional it may have been. Last week the MFA responded to the NCAC letter stating that they’re considering a future symposium on the matter of cultural appropriation. I look forward to such a forum and hope that Mr. Teitelbaum has enough foresight to create a space where opinions can be expressed with full accountability and recourse to the MFA's primary stakeholders including himself and any relevant staff.