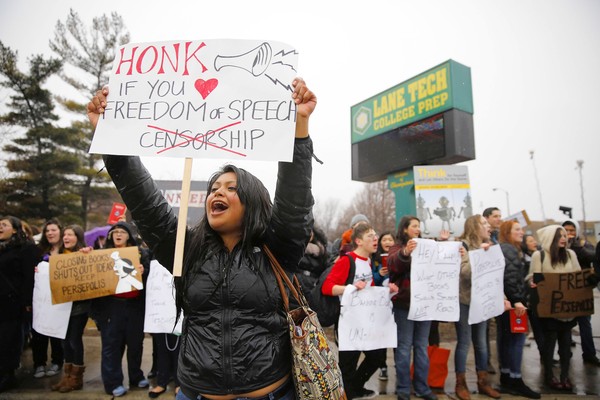 Teachers and students gathered outside Lane Tech College Prep in the freezing rain Friday for a spirited protest. “Honk if you love free speech,” and “Closing Schools. Banning Books. What’s next?” students’ signs read. The protest was organized in response to the revelation that the Chicago Public School Board had evidently mandated that Marjane Satrapi’s graphic novel Persepolis be pulled from all libraries and classrooms by March 15.

As the backlash and outrage escalated in response to the directive, CPS quickly back-pedaled. CEO Barbara Byrd Bennett informed schools *not* to remove the text from their school libraries but continued to request that the book no longer be taught to 7th graders — effective immediately.

Why did CPS, a district with plenty of problems to tackle, suddenly up-and-decide that the graphic novel needed to be removed that very instant? The only explanation the district has offered thus far was that concerns had been raised over a scene in the novel depicting a man being tortured for information. Persepolis tells the autobiographical story of a young girl growing up during the Islamic Revolution in Iran.

We sent a letter to the school district on Friday, urging them to reconsider their decision to keep students from reading the critically-acclaimed book and pointing out that students are not ignorant of violence:

“The vast majority of Chicago middle school students are surely aware of the reality of violence and its devastating effects on people of all ages.  Most have witnessed it on the news, if not in their own neighborhoods.”

Satrapi herself has expressed her disappointment with the district, which has effectively aligned itself with the governments of Iran and Tunisia in trying to yank the book out of the hands of students.