Last week brought us one of those rare occasions where Perez Hilton reported on the invocation of First Amendment rights, as Chris Brown declared he would fight a Los Angeles citation. Brown was fined $376 for “unpermitted and excessive signage” for graffiti he had painted on the outside of his Hollywood Hills home, after neighbors complained that the pictures terrified their children and might potentially lower their property values.

In his appeal to the city, Brown wrote that “the murals are a reflection of [my] aesthetic taste and a reflection of free speech and expression protected by the First Amendment to the United States Constitution.”

Now, Brown likely has the finest First Amendment lawyers money can buy, but the incident is a great springboard for a number of questions about graffiti, persisting cultural attitudes toward it and protections of it, as well as the extent to which your right to free expression is often limited when it comes to the “public” face of your personal property.

While zoning regulations were originally written in response to “community opposition to billboards and other types of outdoor advertising,” aesthetic zoning, or regulations that seek to maintain a certain community appearance, are pretty common today. (Powell on Real Property) L.A. is no exception.  Content-neutral zoning regulations, that is to say those which restrict speech without regard to the viewpoint contained therein, are generally upheld by the courts as a “proper consideration in land-use regulation.”

However, the Supreme Court has upheld the First Amendment right to Free Speech when it comes to signs on or outside of one’s home. In City of Ladue v. Gilleo (1994) the Court invalidated an ordinance that prohibited all signs except for “for sale” signs or safety warnings. The Court held that, even assuming that the ordinance was free of content or viewpoint discrimination, the ordinance violated the First Amendment’s Free Speech Clause because minimizing visual clutter was not a compelling state interest and the city had almost completely foreclosed a venerable means of communication that was both unique and important. 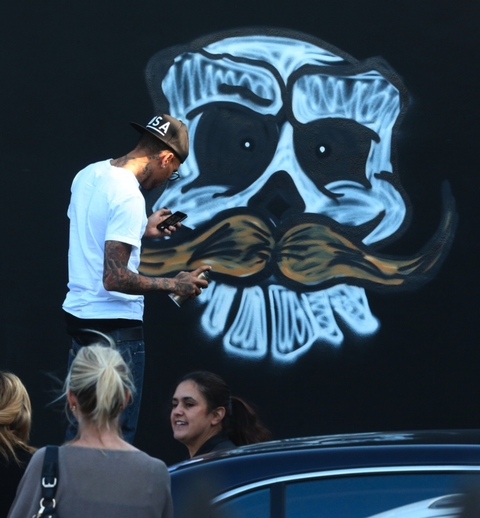 Is graffiti an act of art or vandalism? Basically, yes. It is art. It is vandalism. Sometimes both, presumably.

Almost every municipality has advisories about reporting and discouraging graffiti and, in this context, it is universally considered an illegal act of vandalism. It is commonly held that graffiti destroys property values, makes people feel unsafe and burdens a city or town with heavy cleanup costs. Take the Portland, Maine, police department site on graffiti as a standard response: “Graffiti is…a VANDALISM…a CRIME…a NUISANCE… a BLIGHT.”

It is pretty much agreed that where graffiti appears on private or public property without permission, it is against the law. It’s existence and appearance is often tied to other types of crime, including gang-related activities. And yet, both the form and the content has been widely recognized as both art and cultural expression. That it is sometimes the expressive outlet for young people who have little outlet or opportunity to share their creativity or make their presence known has been a major facet of the debate over spraycan art since the 1990s (see Jeff Farrell’s Crimes of Style for example).

Preconceptions continue to weigh down the graffiti form, even as it has become a medium for consumable art. As they say, it’s location location location. And the location in question — Hollywood Hills — is an interesting place to find a debate over high and low culture and personal/public space.

Do Chris Brown’s monsters bother neighbors more because they find them disturbing looking, or because they are disturbed to be living next to a graffiti-adorned (some might say defaced) property?

Thanks Ryan Gander, NCAC Legal Intern, who contributed research and language to this post.