Does the First Amendment Protect the NY Times in Publishing Trump’s Tax Returns?

Previous Next
Does the First Amendment Protect the NY Times in Publishing Trump’s Tax Returns? 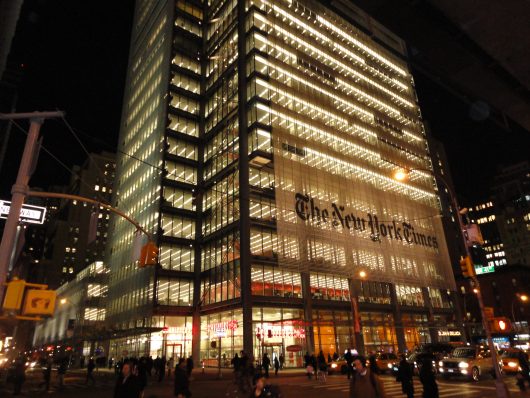 Over the weekend, the New York Times published one of the biggest scoops of this tumultuous election year. After months of mystery around Donald Trump's tax returns, pages from his 1995 returns obtained from an anonymous source by the Times revealed that the Republican candidate took huge financial losses – totaling nearly a billion dollars, that may have allowed him to avoid paying federal income tax for 18 years.

Trump's campaign did not dispute the authenticity of the returns published by the Times but claimed they were "illegally obtained," citing federal and NY state laws prohibiting publication of tax returns without authorization from the owner.

So does Trump have a solid case?  We don’t think so, and we’re not alone.

The case against Trump’s claim is presented persuasively at Concurring Opinions, a legal blog on First Amendment issues.  On Oct. 2, 2016, law professor Ronald Collins posted the views of 10 recognized First Amendment experts about whether Trump could prevail if he did sue the Times. The overwhelming consensus is that he could not:  The right of the press to publish information about matters of public interest is protected by the First Amendment and supersedes any claim to privacy Trump might assert under federal or state law.

Here are a few excerpts from the experts’ opinions. The full text and all opinions gathered by Professor Collins are posted on https://concurringopinions.com/.

This is open-and-shut. As the Supreme Court made clear in the Pentagon Papers decision, the press cannot be held liable for publishing truthful information that is relevant to the public interest in the absence of a clear and present danger of grave harm. (Geoffrey Stone, law professor, University of Chicago Law School)

The assertion that the press cannot analyze the tax returns of a presidential candidate without first getting the candidate’s authorization is preposterous." (Robert Corn-Revere, First Amendment lawyer.).

Trump’s First Amendment privacy interest in whether he pays his taxes went out the window when he decided to run for the office of chief law enforcer. (Burt Neuborne, law professor, NYU Law School.)

The Supreme Court has clearly and repeatedly held that the First Amendment protects the right of the press to publish information on matters of public concern, and that is true even if the information was unlawfully obtained by someone who then gave it to the press." (Steven Shapiro, Legal Director of the ACLU.)

The law seems pretty clear – but in this election cycle, it’s not clear how much that matters.