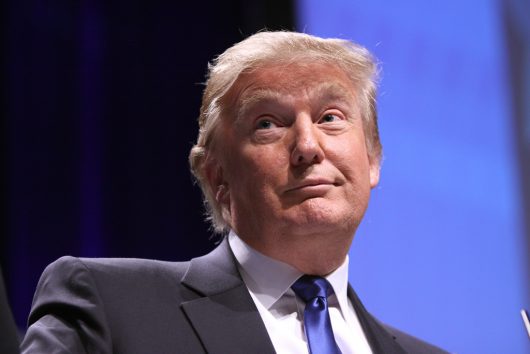 UPDATE 10/31/2016: The American Bar Association will publish the report on Trump's libel record after all. Law.com reports that Seager re-submitted the article and the ABA agreed to publish the article, unedited, next week.

UPDATE 10/24/2016: The New York Times reports how the American Bar Association (ABA) killed a report dissecting Trump's attitude toward frivolous libel lawsuits and the First Amendment over fears of legal repurcusions. The article, titled "Donald J. Trump Is A Libel Bully But Also A Libel Loser," explores the many libel cases Trump has launched (and lost). According to the Times, ABA authorities feared the piece's "inflammatory language" would provoke a lawsuit that damaged the reputation and finances of the association. Other staff dispute that the association was worried about potential legislative backlash, but rather objected to the "use of partisan language." According to the author, however, the edits that the ABA suggested completely changed the thesis of the piece. It has since been published, unedited, on the Media Law Resource Center.

The ABA's response to the article illustrates precisely why Trump's disdain for the First Amendment, his willingness to fire off frivolous libel lawsuits, is dangerous. Often, people argue Trump is all bluster, his threats hollow. However, this, again, reminds us of his primary speech chilling tactic: fearing would-be critics into submission.

Last week, NCAC discussed The Times First Amendment protected right to publish pages from Trump's tax returns after his lawyer threatened legal action against the paper. The latest episode in the chaotic saga between Trump and the newspaper involves The Times' report about the testimony of two women who say they were sexually assaulted by the real estate tycoon.

Trump, predictably furious, sent a notice to the Times threatening a libel suit if the paper did not retract the story. In a much shared rebuttal, the Times' effectively asks Trump's lawyers to bring it on. "The essence of a libel claim," the Times' letter reads, "is the protection of one's reputation. Mr. Trump has bragged about his non-consensual sexual touching of women."

In light of the Washington Posts' release of a tape in which Trump is caught bragging about being able to "grab [women] by the pussy" and other smutty instances from Trump's flamboyant media career, The Times argues their latest scoop will have no effect on his reputation.  One highly regarded lawyer, Theodore Boutrous, Jr., describes Trump's threatened lawsuit as "utterly frivolous." Not only are the testimonies backed up by Trump's own words, the Times' reporting uses first-person accounts that were corroborated by witnesses.  In addition, as was the case with the tax returns, the information is of immense public concern–about a potential U.S. president– and thus it receives "the highest degree of First Amendment protection."

Trump's trigger-happy litigation threats further illustrate his poor knowledge First Amendment and its implications. But perhaps worse, they shows his lack of respect for free speech protections as enshrined in the Constitution.

Throughout his campaign, Trump has shown his disdain for First Amendment protected press freedoms. He has blacklisted from his campaigns' press corps media organizations who have written unfavorably about him and suggested that as president he will "open" libel laws to make suing media companies easier. Indeed, after a speech in Florida yesterday, in which Trump rallied against a "crooked" media conspiring to derail his campaign for the benefit of Hillary Clinton, the Committee to Protect Journalists released a statement arguing that a Trump presidency will be a threat to press freedoms both in the United States and around the world.

As Boutrous notes, Trump's latest attack on the Times can only be "a stunt meant to chill aggressive reporting—precisely the sort of behavior that led the Supreme Court to erect strong constitutional protections against libel claims."  While the Times can’t be so easily intimidated, smaller media outlets may be more vulnerable.