Previous Next
Doin’ the Love Game 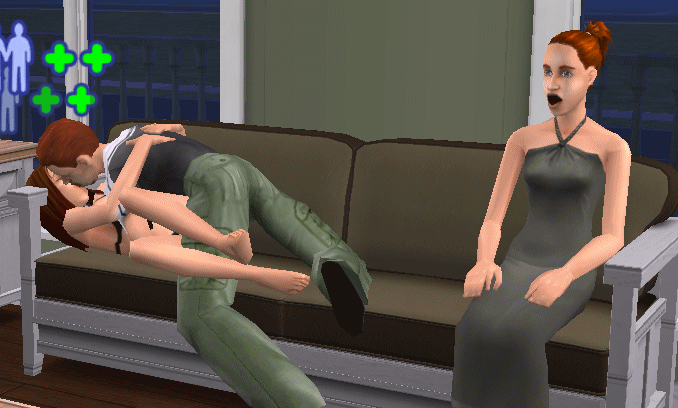 The Electronic Entertainment Expo (E3) is known for exhibiting a panoply of video game products and innovations, so IGN blogger Michael Tomeson recently quested to find video games dealing with sex. Despite a medium that presents simulated activities ranging from invading Normandy to designing entire civilizations, Tomeson noted the continuing informal ban on sexual content within the mainstream game market.

Two exceptions in this year’s crop are the psychological thriller Catherine and The Sims Social, the latest installment in the massively popular The Sims franchise. The respective pedigree of these games have something to do with their ability to brave the crossing into lusty game narratives.

The Sims Social is inheritor to one of the best-selling franchises in video game history, renowned for its “crossover” popularity beyond the typical gamer audience. Instead of presenting warriors, sorcerers, or space marines, The Sims aimed to simulate people living, working, and even loving in a glossy suburbia. All Sims can flirt, kiss, “make whoopee” (as the game terms it) and originate as bisexual but develop a preference based on the player’s choices. “Whopee” and relationships make up only a fraction of the original Sims game, but the multiplayer The Sims Online release eventually grew a sizable cyber-sex market utilizing the game’s own currency.

To sum up: Catherine has migrated over from a games culture full of sexual content, and The Sims positioned itself early as an “anti-game” and managed to pull off an innocuous playfulness that makes the saucy moments more palatable.

Why, then, are sex and relationships only dealt with by such outliers within the anglophone gaming market? The first person shooters, role playing games, and sandbox titles that constitute the bulk of releases might use sexualized content for gritty ambiance or marketing purposes, but that’s just window dressing. Their eschewing of sex narratives and mechanics, Tomeson notes, seems pretty arbitrary considering the copious, graphic violence on offer.

But just as the MPAA issues higher viewer discretion ratings for movies depicting sex than for violence, so does the ESRB for video games. When the Hot Coffee mod depicting simulated sex in the ultraviolent title Grand Theft Auto: San Andreas came to light, the title was re-rated from “Mature” to “Adults Only.” Such higher ratings can negatively impact sales, as an NC-17 rating can be a death sentence to any film with mainstream commercial ambitions.

In 2010, Microsoft pre-emptively banned a pornographic game designed to make use of its motion-sensing, Xbox Kinect camera in order to keep their gaming console “family friendly”. Microsoft categorically denies certification for all Adults Only-rated titles.

Video games reflect the bias among decision-makers in American media that war and gang violence are more “family friendly” than sex. I predict that as video game narratives, technologies, and distribution systems evolve we will see more titles featuring sex and relationships outside the ghettoized “adult” market, though early offers will remain gimmicky or arrive as import titles such as Catherine. The Sims remains a fascinating counterexample, especially with the new social networking features exhibited in The Sims Social.

As titles broach an expanded array of themes, expect more controversies as the medium strains expectations that video games are “for kids” — similar to when American animation broke into more mature themes in the 1990s with The Simpsons and South Park.