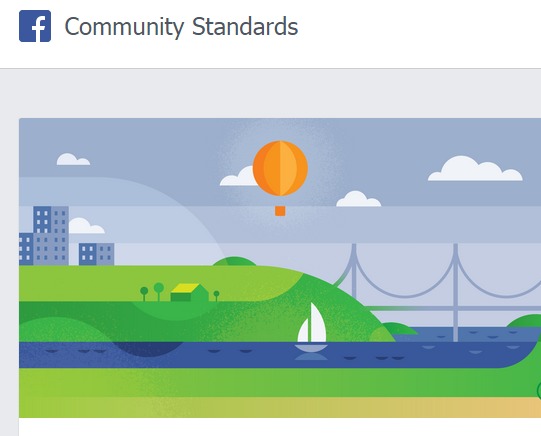 As we've pointed out before, there are some things Facebook doesn't like you sharing with others. Especially things that involves nudity.

A few weeks ago, visual artist Grace Graupe-Pillard wrote a piece called "When Women’s Bodies Get Censored on Facebook: An Artist Responds." She described the ways Facebook's policies breed a certain kind of self-censorship:

I decided to post my self-portraits and quickly got a notification from Facebook’s Standards Policy on Nudity to desist. Intimidated, I devised a strategy of bypassing their provincially narrow definition of nudity and decided to self-censor by covering my breasts (particularly nipples) and genitalia with black rectangles — aesthetically a distraction, but crucial to being permitted to stay in the Facebook community. Since that time, I have feared Facebook’s imposing anonymous “watchers,” and whenever I conceive of a new composite photograph, I sense their hot sighs on my neck, ever vigilant.

She posted a new image on August 9, part of a series of nude photographs of Graupe-Pillard engaging with other pieces of art.

Shortly thereafter I receive an email from Facebook saying that my photograph was anonymously “reported,” and that I would be spared any problems if I deleted the image. Otherwise, the work was “under review.” I did not wipe out the artwork. Consequently, it was removed, along with a letter saying that I did not meet Facebook’s Community Standards and that I had to promptly erase all images containing nudity. I was presented with a page of thumbnail vignettes for me to check off as being expunged.

What Graupe-Pillard really wanted was a way to register her frustration with Facebook over how they handle such complaints: "I had no means of redress against anonymous 'reporters' airing grievances." She's even launched a petition to Facebook, "Stop Banning Artists' Images of Nudity on Facebook Without Access to Redress."

This was not our first time this has happened to us, and there are numerous artists who have run into the same problem.It should be said that, whatever you think of Facebook's standards, some of Graupe-Pillard's images arguably violate them. They read in part:

We remove photographs of people displaying genitals or focusing in on fully exposed buttocks. We also restrict some images of female breasts if they include the nipple, but we always allow photos of women actively engaged in breastfeeding or showing breasts with post-mastectomy scarring.

our policies can sometimes be more blunt than we would like and restrict content shared for legitimate purposes. We are always working to get better at evaluating this content and enforcing our standards.

That would seem to be what happened to Missouri artist Tina Garrett, whose semi-nude oil painting Lumiere was flagged as obscene several times by Facebook– leading them to temporarily suspend her account. This is curious, since Facebook's policies suggest that Garrett's work should be perfectly acceptable, since the site says it will "allow photographs of paintings, sculptures, and other art that depicts nude figures." A photo of an oil painting would clearly meet that standard.

Garrett has received support from other artists, but she's reportedly had trouble getting anyone at Facebook to explain why they acted the way they did. As she told the newspaper Lee's Summit Journal:

I would like Facebook to set very clear standards for artists for what is and what isn’t acceptable to post… and I want them to protect us.